The Mackie MR5 MKII has been available for a while now. So we took a closer look at these active studio monitors in our tech lab. These monitors are affordable studio (and DJ) two-way reference monitors. The MR5 has a 1 inch tweeter, 5.25 inch woofer and 55 watts in the low end and 30 watts in the high end, with a bass port at the back. When unpacking these babies I immediately realised, these compact monitors are quite heavy, weighing about six kilos (per monitor). 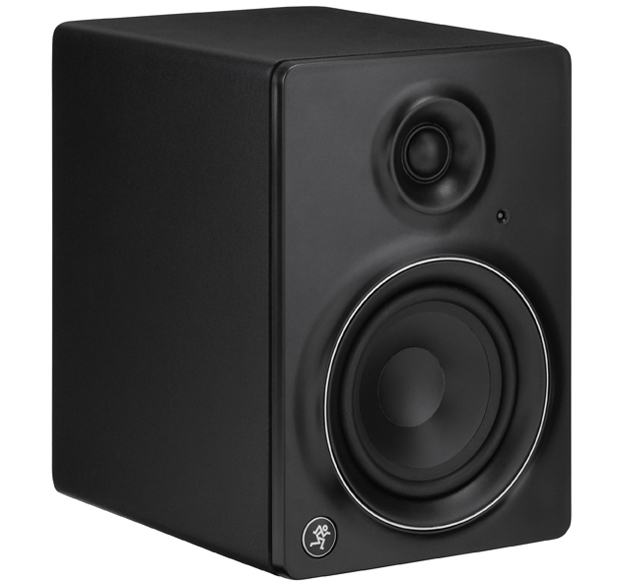 With speakers like these Mackie MR5 MKII, you start listening with that price in the back of your mind. You can’t compare them with monitors from brands like PSI, PMC or other high-end manufacturers. That’s a lost game before you enter the field, in my opinion. So lets just listen to these monitors ‘as is’.

When placing these speakers in your setup it is clear you have to place them well for a decent stereo image. Now that’s not really a surprise of course. With a high and lowpass filter switch at the back you can alter the balans between the high and low to your space (environment). I couldn’t hear any significant difference in our own studio. However that can be different in any other studio environment.

Furthermore you need to place the monitors at least 20 cm away from the wall or your low end will get a ‘big’ boost. You definitely need that space away from the wall! I placed the Mackies on my Mopads (from Auralex). With these MoPads I could reduce the space from the wall a bit

I found the sound of the MR5 MKII to be pleasant. As the monitors have a small cabinet/housing I felt they couldn’t get rid of all its energy. At an average volume with classical music, jazz, pop and dance, the frequencies stayed clean and ‘on their feet’. However, if you went over the 0 dB threshold it gets a bit unpleasant and gritty. Especially if the music has lots of mid and low end and you have to listen for over a longer period. At lower volumes you lose power in the mid and high end, with the low end keeping up its posture.

In the DJ Booth

While we had these in our studio why not try them out as DJ monitors, because here’s where you deal with lots of low and high frequencies, and because I was curious. So I hooked them up in my DJ setup. Because of my limited space I placed them against the wall, which wasn’t a good idea. I had to use the MoPads here as well, as I ran into problems from the start with the low end. After about an hour of mixing I had to come to a conclusion that these monitors really belong in the studio, not in (any) DJ booth. Like I mentioned before they couldn’t get rid of their energy. The monitors don’t sound bad, but if you need to ‘bang’ for a bit, you realise yhey’re not meant for this.

If you are looking for a decent and affordable pair of studio monitors, in the price range of around 300 Euros, you have a large amount of alternatives. Personally I have great experience with KRK’s RP6, but have to admit I place the MR5 MKII‘s higher on my list when it comes to sound quality. The Mackies sound pleasant, are well designed and even after a long listening session they keep up in the low end, stay fresh in the mids and highs. Maybe a bit too sharp, but maybe that’s a bit ‘nit picking’. Overall I can say that the MR5 MKII studio monitors have the right price/quality ratio.