Zynaptiq announces the introduction of two new plug-ins, UNCHIRP and UNFILTER, at the Frankfurt Musikmesse, Hall 5.1 Booth A91 (April 10-13, 2013).

This is a real-time plug-in that removes the most objectionable artifacts associated with low bit-rate lossy audio encoding, de-noising, and other processes that operate in the frequency domain, commonly referred to as Chirping, Warbling, The Tweeties or Underwater-Sound. This type of artifact has so far been virtually impossible to remove due to its narrow-band and short-time nature. UNCHIRP salvages poorly encoded music,
speech that has gone through a poor GSM/satellite uplink, footage recorded with consumer mobile devices, and material that has been de-noised too aggressively. 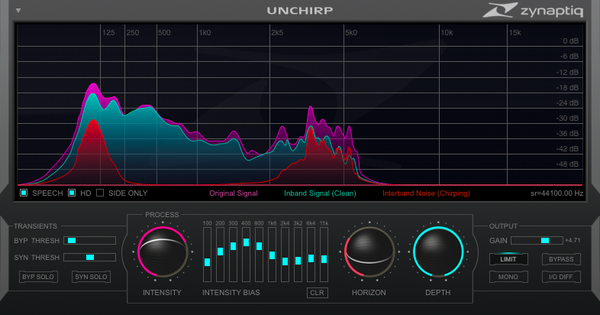 This is a real-time plug-in utilizing a blind de-convolution process to remove filtering effects, such as comb filtering, resonance, or excessive equalization – effectively linearizing the frequency response of a signal virtually automatically. UNFILTER also removes slow moving flanger/chorus effects, and can apply a detected filter response to another signal, or store it for later use. Applications include repairing poorly mic’d production sound or musical recordings, adapting multiple sounds to be in the same acoustic “world”, removing “boominess” or resonance, generally re-balancing the spectral contour of a signal or creatively designing new sounds.

UNCHIRP will be available May 6th, 2013, and UNFILTER May 20th, 2013, from the Zynaptiq website as well as through select international resellers. Free trial versions will also be available. Both plug-ins will come as AudioUnits, RTAS, AAX Native and VST for both Mac and Windows operating systems.

Pricing is TBA.
For more information, please visit the product websites at UNCHIRP or UNFILTER.