In today’s über-connected world, it’s easy to become inured by the nearly endless procession of cookie-cutter bands on the Web. But when a breath of fresh air like Alt-J comes along, it’s proof positive that great music stands out on its own merits. In almost no time at all, the Leeds, UK-based quartet has captured the ears of millions of music lovers, with each gig playing to ever-larger sold-out crowds. 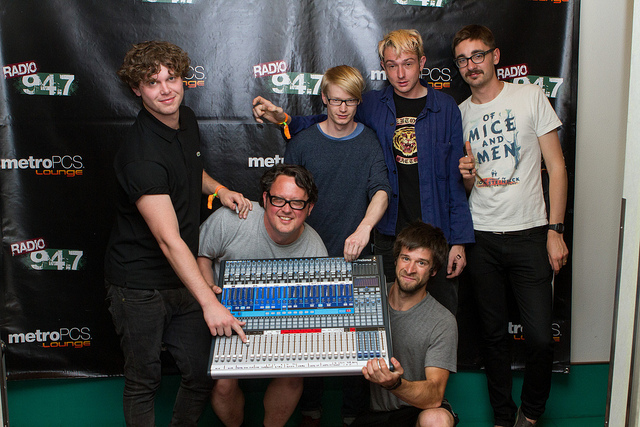 On Alt-J’s recently completed U.S. tour, the band counted on their PreSonus StudioLive 24.4.2 digital console to deliver monitor mixes. As front-of-house engineer Lance Reynolds explains, he had been interested in checking out the StudioLive, and the tour presented an ideal opportunity.

“I was really attracted to the layout of the StudioLive,” says Reynolds. “The input gain, the channel faders, and the master output are always right there in front of you -no page flipping or knob sharing to access the essential controls. I had originally wanted to try the new 32-channel console for FOH but the tour was kicking off before it would be available. But in talking about it with the band, everyone agreed that the 24.4.2 seemed like a good fit for monitors. It had everything we needed in a nice, compact footprint.“

Reynolds says the StudioLive’s snapshot recall has been a major asset. “The consistency factor is great -it saves us a lot of setup time, especially going into a different venue every night. And the small form factor makes it easy to get it on and off the stage.”

Monitor engineer Ron Sharpless uses the StudioLive to generate several stereo mixes for the band’s in-ear monitors. “I’m doing four mixes for the band, including a ButtKicker for the drum mix,” he explains, “plus a mix for me, another for the guitar tech, and an extra monitor mix. It’s great to be able to squeeze that many stereo mixes out of a console.“

Sharpless also gives high marks to the StudioLive’s onboard DSP. “The reverbs sound really rich. With everyone on in-ears, it’s important to be able to make the mix sound good, and the effects in the console really go a long way.”

“The ability to multitrack with the StudioLive is another cool feature,” Sharpless continues. “We didn’t have as many opportunities to record the gigs as we would have liked, but when we did, it was amazing how easy it was. You just plug in a FireWire cable and click on Capture.“

“I did get to use the StudioLive at FOH on a few occasions,” Reynolds reports, “and Capture enabled me to record a soundcheck and immediately play the mix for the band. Plus, I was able to solo, mute, and change individual levels. Very cool. We also brought in the StudioLive to do a live gig at a radio station in a very small room, and I was able to multitrack, give everyone their monitor mixes, and mix the show for the live audience.“

“Especially for a club tour, or a tour like this where a band’s doing a mix of clubs and mid-sized venues, it’s really the perfect console,” says Sharpless. “For a desk this size, at this price point, the amount of power and features it offers is just amazing.”

For Reynolds, it comes down to the sound. “I’m a reluctant player in terms of digital, and for the most part I prefer to stay in the analog world,” he acknowledges. “That said, I appreciate the benefits of digital, and have been in situations where I was very happy to have the ability to recall a mix. Ultimately, if it sounds good I’m happy-and the StudioLive sounds really good.”