Continuing the momentum that began with a brand re-launch and release of Tracktion 4 last January, followed by a recent bundling agreement with Behringer, Tracktion Software Corporation (TSC) is pleased to announced yet another milestone for their popular music creation software. 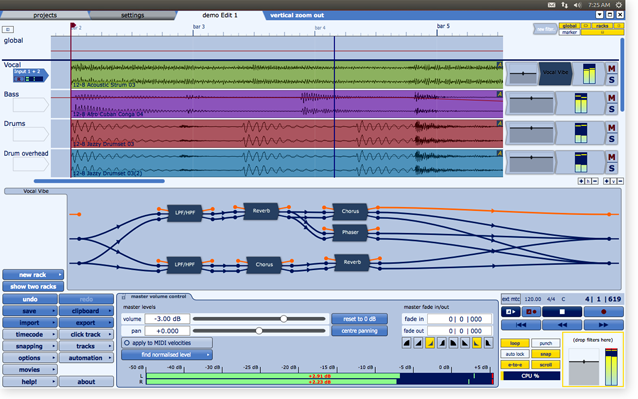 Beginning immediately, Tracktion 4 is available for 64-bit Linux systems. This release—along with the current 64 and 32-bit versions available for Mac and Windows—solidifies Tracktion’s position within a very small family of music creation applications to broadly support all three of the major operating systems.

“Linux users, much like Tracktion users, have always been on the cutting edge of technology and willing to look beyond the status quo for alternative solutions,” explained Julian Storer, creator and chief developer of Tracktion software. “In that spirit, bringing Tracktion to Linux just makes sense. I’m extremely excited to open a whole new community to the joy of music creation in their preferred environment.”

With a powerful and elegant single-screen interface, Tracktion forgoes the complex, multi-screened designs that have been standard for conventional DAW’s since developers first digitized tape-based workflows over 20 years ago. Tracktion replaces this paradigm of the past with a modern, drag-and-drop interface that dramatically simplifies the recording, editing and mixing process. Truly unique, Tracktion has earned a loyal following of users who appreciate its power, simplicity and unique ability to unburden the creative process.