Last year saw Wavesfactory making a brave move into the wonderful world of audio plug-ins with TrackSpacer, a keenly- priced debut developed in close collaboration with French virtual instrument and plug-in guru Xavier Oudin (of XILS-lab fame). As implied by name, TrackSpacer cleverly creates space in a music mix for any instrument, voice, or other audio source by performing automatic, multi-band equalisation on a per track basis. 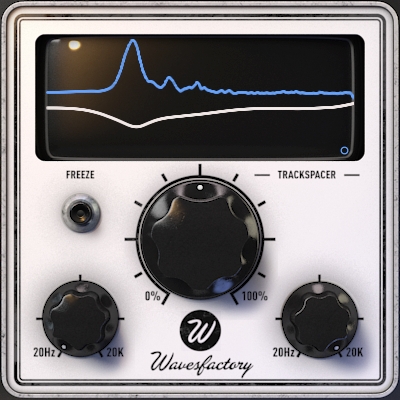 But how, exactly, does it do that, then? Quite simply, it analyses the audio frequency content in a track/bus via SideChain, and applies an intelligent 32-band EQ to subtract those frequencies from the channel/bus where TrackSpacer is inserted — giving room or space to a specific track by reducing its frequencies on another track in realtime, in other words!

Perfect as that may sound, there’s always room for improvement, of course. Needless to say, the TrackSpacer 2.0 update does not disappoint, offering AAX support; new Attack/Release controls; M/S mode (to subtract frequencies on the mid channel, the sides, or anything in-between); L/R mode improvements (pan the effect in the left channel, right channel, or anything in-between); SideChain listen function (to hear what’s coming through the SideChain input with filters applied to better fine-tune the plug-in); and last, but not least, several GUI improvements, including a new Advanced Panel, colour lines, LED light on the FREEZE button, brighter knobs, and clear, white background.

TrackSpacer 2.0 is a versatile tool that can be used to resolve many truly tricky musical mixing scenarios. For instance, if a kick drum and bass part are competing for space, simply insert TrackSpacer 2.0 in the bass track and have it ‘listen’ to the kick; then fine-tune TrackSpacer 2.0 so it only subtracts the frequencies from the bass signal that help define the core sound of the kick drum each time it plays. The result? Both kick and bass can be heard more clearly.

TrackSpacer 2.0 can be ordered online for an introductory price of €39.00 EUR (rising to €59.00 EUR) directly from Wavesfactory here: plugins.wavesfactory.com