Apple today unveiled Logic® Pro X, the most advanced version of Logic Pro to date, featuring a new interface designed for pros, powerful new creative tools for musicians, and an expanded collection of instruments and effects. Logic Pro X includes Drummer, a revolutionary new feature that provides a virtual session player that automatically plays along with your song in a wide variety of drumming styles and techniques, and Flex Pitch, which provides integrated pitch editing for audio recordings. Apple also introduced Logic Remote, an innovative new way to play and control Logic Pro X from your iPad®, giving musicians the flexibility to create and mix their music from anywhere in the room. 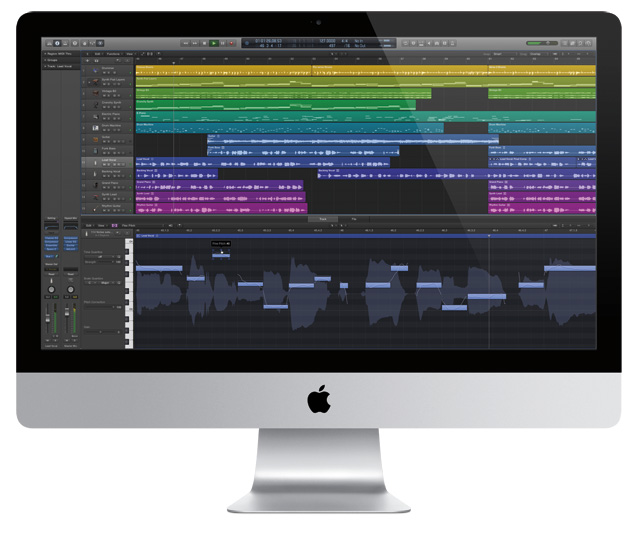 “Logic Pro was critical to writing and recording our debut album Night Visions, so we couldn’t wait to get our hands on Logic Pro X,” said Wayne Sermon, guitarist of the Platinum-selling band Imagine Dragons. “We love the new design, and the creative features of Logic Pro X have already been inspiring us to write new material while we’re on tour.”

Logic Pro X has been designed with a modern new look while preserving and expanding the power and features that professional users rely on. The streamlined interface provides access to advanced tools and functionality for more technical tasks, or can be hidden to allow musicians to focus on being creative. Flex Pitch helps users fix out-of-tune vocals and even change the melodies of recorded audio by manipulating individual notes within an audio waveform. Track Stacks lets you organize and collapse multiple tracks into one, or can be used to create rich, layered instruments. Smart Controls allow you to manipulate multiple plug-ins and parameters with a single move for quick and powerful sound design. An improved Mixer helps manage mix sessions more efficiently, with increased visibility into signal flow and dynamics and faster ways to manipulate channel inserts.

Logic Pro X provides a collection of new creative tools for songwriting and music production. Drummer delivers professionally produced, realistic drum tracks that respond to your direction and can perform millions of unique grooves in rock, alternative, songwriter and R&B genres. Drummer is powered by the performances and sounds of some of the industry’s top session players and recording engineers, including legendary mixer/producer Bob Clearmountain, who has worked with the Rolling Stones, Bruce Springsteen and David Bowie. Designed to work with Drummer, the new Drum Kit Designer plug-in lets you build your own custom kit using a diverse collection of professionally recorded snare drums, toms, hi-hats and cymbals that you can mix, match and fine tune to get the right drum sound for your song.

Logic Pro X expands Logic Pro’s rich collection of synthesizers and keyboards with more new instruments. The Arpeggiator is one of nine new MIDI plug-ins and can transform a simple keyboard chord into an elaborate performance. The new Retro Synth emulates some of the most popular classic synthesizer tones from the 70s and 80s, and Vintage Keyboards offer realistic models of electric pianos, B3 organs and clavs, with sophisticated tone-shaping controls. Bass Amp Designer allows bass players to play and record using vintage and modern bass amps, with cabinets and microphones that can be configured to build a custom bass rig. Logic Pro X also features an entirely new Sound Library with an updated loop collection and over 1,500 instrument and effect Patches that make creative use of Track Stacks, Smart Controls, the Arpeggiator and other new plug-ins. 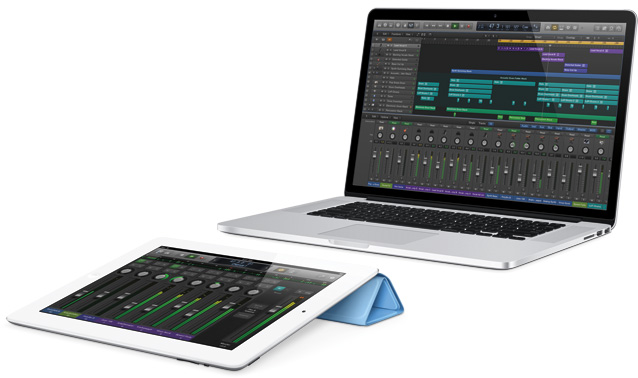 This is an innovative new way to extend the creative power of Logic by using your iPad. Designed to take full advantage of the iPad Multi-Touch™ display, Logic Remote gives users new ways to record, mix and even perform instruments in Logic Pro X from anywhere in the room, turning their iPad into a keyboard, drum pad, guitar fretboard, mixing board or transport control.

MainStage® 3, a major update to MainStage, is the live performance companion app for Logic Pro X, turning the Mac® into a live rig that makes it easy to bring sounds from the studio to the concert stage. MainStage 3 features a new user interface and maintains compatibility with the new Logic Pro X plug-ins, Patches and Smart Controls.

Pricing & Availability
Logic Pro X and MainStage 3 are available today from the Mac App Store℠ for $199.99 (US) and $29.99 (US), respectively. Logic Remote is available today as a free download from the App Store. For a complete list of system requirements and compatible systems, please visit: www.apple.com/logic-pro.