Juno Lee formed the Korean based duo Casker in 2000. The outfit has since then released six albums, garnering much attention and critical acclaim. Their fusion of electronica, pop and world music is the soundtrack for the perfect cocktail party. 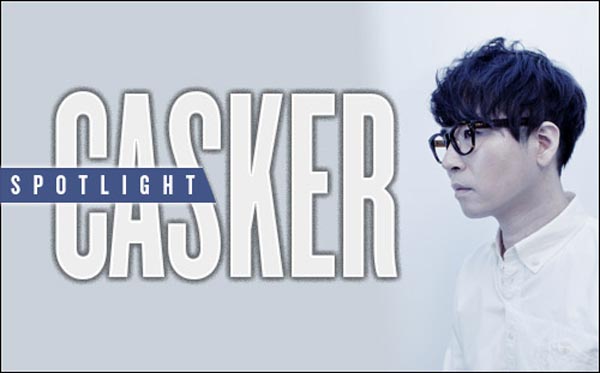 You are a member of Casker as well as a producer and a songwriter. You’ve got a lot of things on your hands.

It is a big challenge but also a big motivation for me to work in such diverse fields. This helps to raise our band’s profile and it gives learning opportunities from all kinds of artists. Recent soundtrack works meant a lot to me, as I had to work with the other staff members on site in real time. This was really interesting because soundtrack is usually done during the post production in Korea.

What do you enjoy more, playing live with a band or to DJ?

I don’t DJ as often anymore. I focus more on live performances. When we play live, it’s really important to make our music very persuasive to the audience. Our aim is to deliver the closest possible sound of our album to the audience, to have those people who don’t know us fall into the world of our music and lyrics. On the other hand, it’s most important to heat up the floor when DJing. No need to be a philosopher on a deck. Tempo is what it matters.

How do you use your equipment?

I don’t have any specific rules. I always start from the scratch completely, I don’t really care whether I use hardware or software. I only consider which instrument fits the best on current project. It only makes the songs sound more of the same if you stick to one rule. I hate working that way. I like to change instruments assignments, and DAW even, depending on the project.

What Elektron gear do you currently have?

I’m using Machinedrum SPS-1 UW and Analog Four. Both are located on my desk and ready to be used. They are really great. I love the groove of Machinedrum’s sequencer. It’s not so difficult to reproduce the classics 808 and 909, but SPS-1’s crunchy percussion sounds are definitely unrivalled. I especially love the parameter lock feature of SPS-1. I can pull out living, breathing patterns from it very easily. I also like the internal bit crusher, which I sometimes use when processing external sounds. I purchased Analog Four for making film music. It’s really amazing. I can’t believe that such great sounds are coming out from such a compact unit. Its sequencer is superior and I can use it as a sample library. It feels like I’m looking at the future of the TB303. The build quality is absolutely tight. I built a rig of analog synths when I was working on my last album, and the Analog Four is a definite winner. I love the internal effects and the tone, the fatness, I love it all. It feels like it’s only making the essential sound.

Elektron gear is irreplaceable. I’m not sure if this is an advantage to other people, but this is a clear advantage for me. Very powerful yet delicate.