Focusrite has announced the launch of iTrack Studio, a complete system for recording music on the Apple iPad (or Mac/Windows computer) with everything a musician needs in the box. 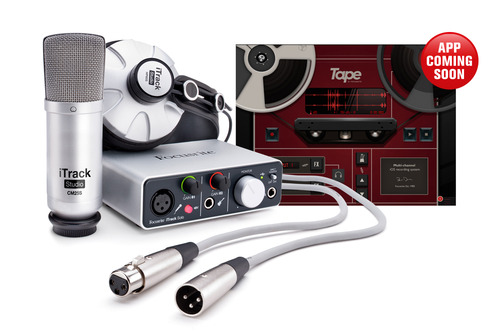 iTrack Studio includes Focusrite’s solid, metal-cased iTrack Solo, with dual inputs for recording instrument and vocals simultaneously – using the included studio condenser mic and Focusrite’s renowned mic preamp technology. Dual outputs drive monitors and the included headphones for an accurate impression of what’s being recorded. iTrack Solo ensures that everything is captured as high-quality audio: up to 24-bit 96kHz sampling. It comes with a 30-pin device link cable for connection to an iPad and can be connected to iPad 4 and iPad mini via an inexpensive lightning adapter – it can also connect via USB to a Windows or Mac computer.

The included CM25S studio-quality condenser microphone – the most versatile type for recording applications – is styled to match the interface and comes with an XLR mic cable. It will faithfully capture almost anything placed in front of it, from vocals to piano, acoustic guitar and much more. HP60S monitor headphones are included to ensure accurate reference monitoring of everything recorded. The closed-back type effectively isolates the listener from the external environment for minimum distraction and maximum accuracy.