Apple today announced iOS 7, featuring a completely redesigned stunning new user interface, will be available starting Wednesday, September 18 to iPhone, iPad and iPod touch users as a free software update. iOS 7 has hundreds of great new features, including Control Center, Notification Center, improved Multitasking, AirDrop, enhanced Photos, Safari, Siri and introduces iTunes Radio, a free Internet radio service based on the music you listen to on iTunes. In addition, iOS 7 has been engineered with deep technical and design integration with both iPhone 5s and iPhone 5c. 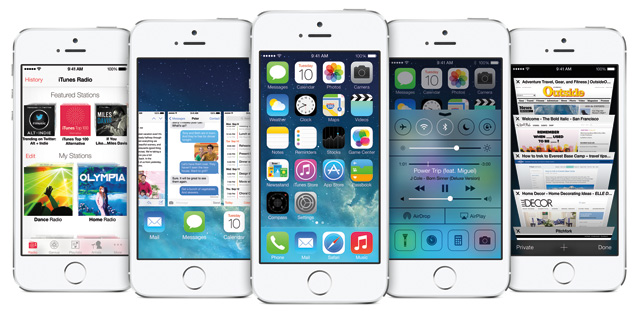 “iOS 7 is completely redesigned with an entirely new user interface and over 200 new features, so it’s like getting a brand new device, but one that will still be instantly familiar to our users,” said Craig Federighi, Apple’s senior vice president of Software Engineering. “Next month we’ll be shipping our 700 millionth iOS device, and we’re excited about what our hundreds of thousands of iOS developers are doing to bring great new features to their apps.”

Apple engineered iOS 7 to take full advantage of the advanced 64-bit technologies in iPhone 5s, including the native 64-bit kernel, libraries and drivers. All the built-in apps have been re-engineered for 64-bit, and iOS 7 provides a seamless developer transition with Xcode® support and the ability to run both 32-bit and 64-bit apps. iOS 7 also provides deep integration with the new Touch ID™ sensor and takes full advantage of the new iSight® camera sensor to enable new features like automatic image stabilization, Burst Mode and Slo-Mo video with 120 fps. Combined with the new Camera App in iOS 7, iPhone 5s provides up to two-times faster auto-focus, faster photo capture and better dynamic range. iOS 7 is designed to complement the gorgeous exteriors of iPhone 5c, with matching wallpapers and translucency that carry the color through the entire experience.

With more than 200 new features, iOS 7 for iPhone, iPad and iPod touch includes

Additional new iOS 7 features include a new Find My iPhone Activation Lock, that requires your Apple ID and password before you can turn off Find My iPhone, erase data or re-activate a device after it’s been remotely erased; FaceTime® audio for high quality calls over a data network; and new ringtones, alarms, alerts and system sounds.

iPhone, iPad and iPod touch customers have access to the revolutionary App Store℠, which offers more than 900,000 apps in 155 countries around the world. iOS 7 now features Popular Apps Near Me, a new way to find apps based on your current location, and iOS 7 will automatically keep your apps up to date. More than 50 billion apps have been downloaded from the App Store to date, offering customers an incredible range of apps in 23 categories, including newspapers and magazines in Newsstand, games and entertainment, business, news, sports, health and fitness and travel.