One of the major issues of getting a mix right is to know how well the mix translates on any given speaker system. How more worse it sounds the better in that case. That’s why I use the stock audio system in my car because it sounds abysmal which is perfect to check mixes. Also when your monitors aren’t that pristine, when you are listening to a mix, you’ll often miss out on details. The other way around applies as well. Even when you have a mastering grade sound system you may wonder how it will sound on a consumer grade sound system. Of course you can create your own impulse responses of various environments and use them with a impulse response plug-in to create this effect but that takes effort and time.

Focusrite create a small square box that has a dial, 1/4″ headset phone output, spdif input and a USB connection which also serves as power. Hook it up to a computer (PC or Mac), install the software and use a headset of your choice. You can use the unit in combination with every sound interface that has a spare spdif output as well. And

when you use a Focusrite Scarlett series interface the VRM box can be integrated with the mixer application.

Using the VRM software is fairly simple. You can enable the modeling and then choose from 3 different environments: studio, bedroom, living room. In total there are 15 impulse responses available to use. From the simple NS10 and Auratone to a LCD TV and PC speakers. For every impulse response you can check the extra information available. You also can adjust for the output in 3 stages: 0, -6, -9dB. If you choose for 0dB the sound may clip from time to time. Useful if you want to use too loud situations. Otherwise I’d leave it at -6dB.

To compare one of my own mixes with different models it was fairly easy to find out how the sound changed. I must admit that for all models the rooms sounded a bit verby and had a delay I’m not used to hear on a headset. To the algorithm itself I noticed a slight metallic sound that I’m not used to in other impulse response plug-in. Hopefully Focusrite can look into this and maybe adjust. Not that it is bothering since you’re testing how bad it sounds anyway. It’s fairly easy to test how the different frequencies translate to each impulse. 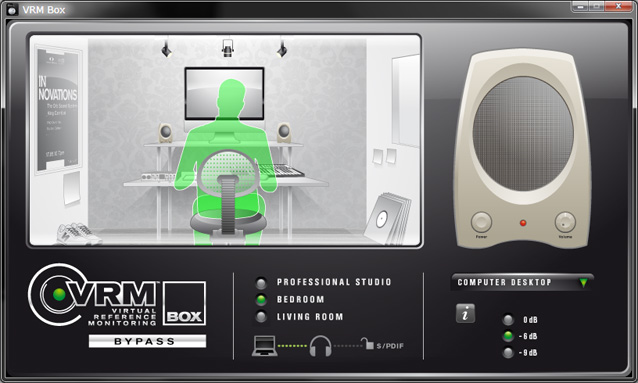 Is the VRM box good enough to sell your old NS10 speakers? I would think so, especially if you almost never use them. If you’re not sure you can find examples Focusrite put up at their soundcloud space.

When you need a small and simple sound interface for your headset the VRM box can help out. Just connect it to your laptop and leave the acoustic modeling off. The DA converters are specced being quite good and to me that sounded just right. The latency of the ASIO drivers are just like any other USB interface.

As a spdif to analog converter with resampling capabilities the VRM box can be used in various ways. An extra output for monitors during a recording session. An extra output for a synthesizer that has an independent spdif output. Or even as a volume dial for your active monitors.

When you can call the VRM box the ‘Sound Badalyzer’ this little box can be very useful for the entry level people and all the way to the seasoned professional. Simply because it’s a collection of 15 impulse response of reference speaker systems that’s easy to use as a hardware unit that just needs a USB and an optional spdif connection. For entry level mixers this can be a very useful and cost effective tool to evaluate your own mixing skills. For mixing and mastering engineers this can be a handy gadget to check out mixes when you are learning to get adjusted to a new set of speakers.