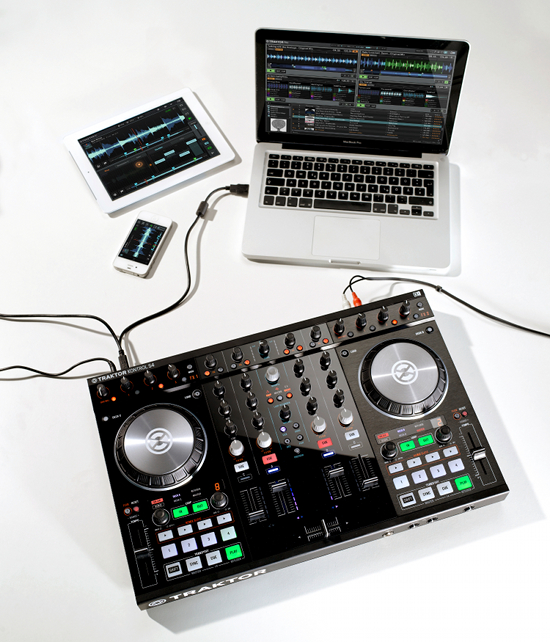 Both units now offer an improved look and feel with added control over the latest TRAKTOR PRO 2 features. Furthermore, both the KONTROL S4 and S2 are now plug-and-play with TRAKTOR DJ – the world’s most successful DJ app for iPad and iPhone.

Built to the same professional standards as the TRAKTOR KONTROL S4, the KONTROL S2 has also been redesigned with RGB backlit buttons, reinforced knobs, and high-res jog wheels also with new aluminum plates. In addition to offering all core TRAKTOR PRO 2 controls, the KONTROL S2 is now plug-and-play with TRAKTOR DJ, delivering physical control for every function including cue points and Freeze Mode and thus yet again redefining on how to embrace integration between hard- and software. Its compact size, robust build, and innate TRAKTOR DJ integration make TRAKTOR KONTROL S2 the ideal choice for iOS-based DJ setups.

Both TRAKTOR KONTROL S4 and S2 include a full version of the flagship TRAKTOR PRO 2 with Remix Decks® software, opening up a wealth of creative possibilities. TRAKTOR PRO 2 offers powerful cue, loop, and sampling functions, a suite of over 30 effects, pro-grade EQs, and fluid playback control of up to 4 decks. DJs can instantly add live editing and sampling to their sets with the use of TRAKTOR’s Remix Decks. Eight Remix Deck slots can hold a total of up to 64 loops or one-shot samples and ready-made Remix Sets from renowned artists are available for instant use.

TRAKTOR KONTROL S4 and S2 also now boast flawless integration with the revolutionary TRAKTOR DJ app for iPad and iPhone. With a 2-channel mixer, 3-band equalizers, and eight professional effects, TRAKTOR DJ brings the quality of TRAKTOR PRO software to the compact and tactile iOS platform. Both units charge connected iOS devices when in use.