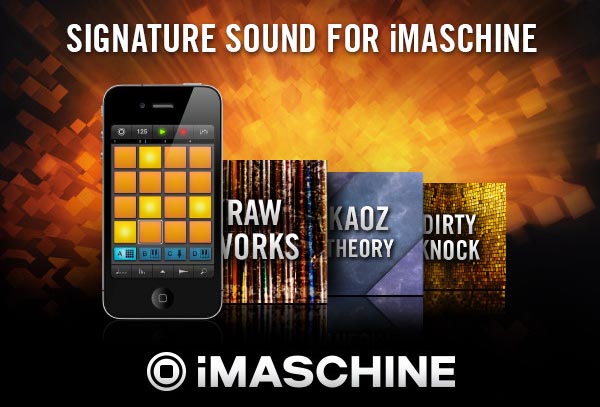 RAW WORKS delivers five projects and five kits of Nottz’s signature sound exclusively to iMASCHINE. Renowned for his work with Busta Rhymes, Snoop Dogg, Kanye West, and J Dilla, Nottz is known for his authentic, old school production style. For this Expansion, Nottz sampled live sessions with his own musicians, then handpicked sounds from the recordings to create a set of gritty drum sounds and melodic phrases. The Expansion’s deep, raw basslines were processed with Nottz’s sampling expertise, delivering a key component of the producer’s signature sound.

KAOZ THEORY brings the unmistakable sound of Kerri Chandler to iMASCHINE – the deep, grooving house style that has made him one of the most respected artists on the underground scene for over 20 years. The Expansion contains a total of six kits, two instruments and two full projects. The three Drum Kits are made up of dirty, analog kicks, snares, hats, and claps. A Melodic Kit provides the trademark Chandler synth chords while two Special Kits deliver basses, vocal samples, synth stabs and keys. iMASCHINE users can also access two instruments and two full iMASCHINE projects created by Chandler himself – fully-conceived musical material available only in this iMASCHINE Expansion.

Other Expansions in the series include sound packs from acclaimed DJ/producers Kerri Chandler and DJ Godfather. The full range of iMASCHINE Artist Expansions can be purchased in the iMASCHINE In-App store for $0.99 / 0.89 € / ¥ 85. iMASCHINE is available at the Apple App Store for $4.99 / 4.49 € / ¥ 450.
All samples provided come in uncompressed .WAV format (16-bit 44.1kHz) and have been processed and tweaked for immediate use. Tracks created with iMASCHINE Artist Expansions can also be exported to MASCHINE and MASCHINE MIKRO for additional editing and finalization.