Analog Four was recently voted Hardware of the Year by the readers of Future Music, and now Swedish instrument maker Elektron is releasing a powerful new OS, making the analog tabletop synthesizer even better. 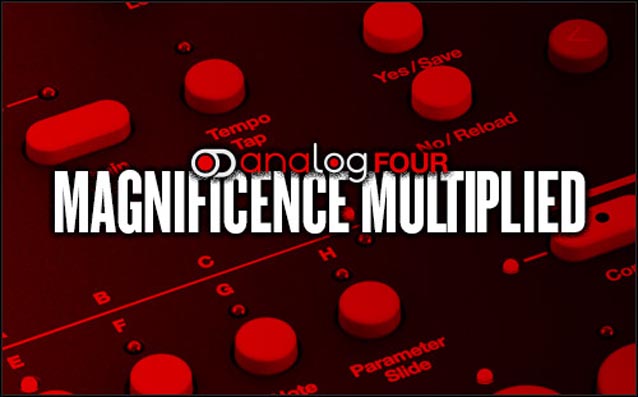 Fully customizable voice allocation. With the upgrade, the Analog Four can be used as a polyphonic four voice synthesizer, as four separate monophonic synthesizers, in four note unison with user defined pitch spread between the voices, or anything in between. Get ready for lush chords, huge mono sounds and multitimbral magic!

The +Drive non-volatile memory increases the amount of storage space by two orders of magnitude. Thanks to the +Drive, Analog Four users can now enjoy working with up to 128 projects. Each project contains up to 128 patterns, 128 kits, 16 songs, 4 globals, and 128 sound pool Sounds. The machine you know and love just got multiplied by a factor of 128. Furthermore, every project has access to the +Drive Sound library, capable of storing 4096 Sounds. The Sounds are taggable for ease of use and identification. After activating the +Drive, 512 factory preset Sounds are instantly available.

The Analog Four Reference Manual has been updated to reflect all changes. Get both OS 1.1 and the updated manual in the Analog Four Downloads page.