Following the successful re-launch of the Tracktion Software brand in early 2013, Seattle-based TSC has released Tracktion Version 5 (T5). This eagerly awaited update to the popular recording application combines an intuitive workflow with a ground-breaking feature set at a remarkable price. Beginning on January 23, 2014, Tracktion 5 is now available for download from www.tracktion.com at $29.99 for upgrades or $59.99 for new licenses. The software operates on Mac, PC and Linux systems. 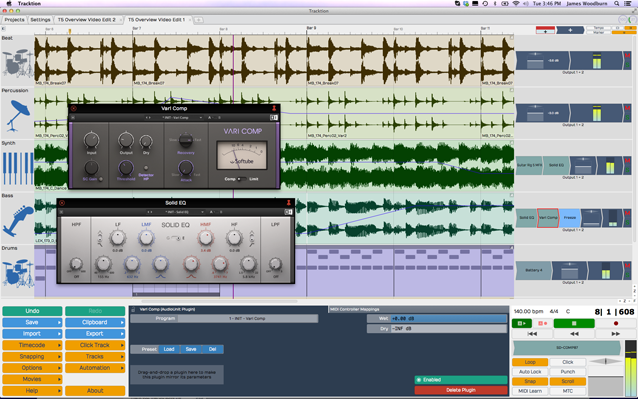 “Our intention from the start has been to enable rapid capture and manipulation of musical ideas,” explained Julian Storer, Tracktion creator and co-founder of TSC. “To that end, Tracktion 5 eliminates barriers to the creative flow as it solves a number of problems that have long plagued the multi-track recording process.”

For instance, the need to create sub-mixes in order to free-up resources for additional tracks is now eliminated by T5’s revolutionary ‘Edit Clip’ format. This allows users to embed multi-track material as if it were a single audio clip – while allowing the source material to be edited. This makes even complex song arrangement a breeze and greatly improves the use of system resources.

To make the best possible use of your computer’s capabilities and achieve professional results without dedicated, external DSP, T5 introduces a full blown System Resource Manager and unique ‘Freeze Point’ technology. This gives the user precise control over which session elements should be automatically pre-rendered, so that they can reduce CPU load while retaining mixing/editing flexibility. The result is surprisingly low latency playback regardless of session size.

While MIDI is not new to digital recording, T5 includes a greatly enhanced set of MIDI capabilities. Creating beats with any of your favorite plug-ins has never been easier with a new “Step Sequencer Clip” that can be viewed and edited right in the timeline like any other clip. The piano-roll editor has also been overhauled to include a raft of new features such as “Per-note Automation” and rapid “MIDI Learn” for easy integration with hardware controllers. There is even support for next-generation instruments such as ROLI’s Seaboard with MDC (multi-dimensional control).