Being a former lead guitarist for legendary bands such as Megadeth, King Diamond and Testament, Glen Drover knows how to get a massive tone, this time using mobile guitar apps. In his home studio in Ontario, Canada, the seasoned musician spends most of his time teaching, writing, and recording, so when he first grabbed mobile guitar apps JamUp and BIAS, the fact of having his whole guitar rig replicated in an iPad made total sense. 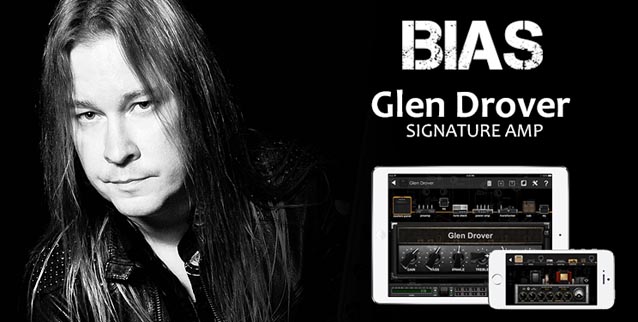 How does a guitar app like JamUp/BIAS help you in the studio?
For the studio, it’s amazing. Plug and play. Just the way I like it! Super easy to achieve great tone with a few taps! You can choose any kind of amp head and modify it to taste with all kind of settings: tubes, preamp, transformer, mic position… it’s crazy! I use both JamUp and BIAS and record directly to ProTools when I need a convenient setup to record my ideas. You can easily record an album with these apps.

What functions within JamUp do you find most useful?
Love all the pedals. Awesome quailty to add to any moded amp that I have created. But probably the effects I use the most are reverb, delay, and noise gate.

What’s your favorite amp in BIAS?
Great question. I’m still experimenting really, but so far, my fav is the treadplate. Also, I use the British style transformer with it because it gives me the warmth and tone that I’m looking for. About cabinets, I prefer the 4×12 Green 25, I find it the most natural sounding for me.

Where do you use JamUp/BIAS the most?
Mostly for studio use, but I do like to sit out in my backyard and jam it with my iPod and small Bluetooth speakers.

Any advice to guitar players out there?
Yes, don’t be a follower. Thats a plastic existance. Do what comes from the heart and follow what you´re inspired by, not what everyone else is doing.