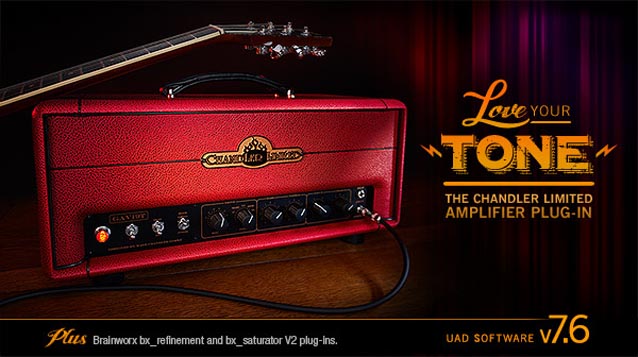 Available exclusively for UAD-2 DSP Accelerators and Apollo-equipped workstations, the Chandler Limited GAV19T Amplifier Plug-In is an exacting emulation of the dual EL84-powered boutique guitar amp. Inspired by British classics such as Vox and Marshall — and lesser-known gems from Watkins and Selmer — the Chandler Limited GAV19T Amplifier plug-in offers features not found on the original hardware, such as an FX Rack with an onboard noise gate, host-syncable lo-fi delay, Power Soak, and pre/post switchable EQ filter controls.

The Brainworx bx_saturator V2 Plug-In is a powerful multi-band M/S (Mid/Side) processor that allows users to add saturation, drive, and distortion exactly as desired. It features Brainworx´s “True Split” crossover technology, which ensures that the Mid and Side channels are always perfectly in phase, yielding focused, large-sounding mixes and masters.

The Brainworx bx_refinement Plug-In allows mixing and mastering engineers to remove the harsh, hard edges of their tracks without dramatically altering the character and tone of their source material. Designed by mastering engineer Gebre Waddell of Stonebridge Mastering, the bx_refinement plug-in is based on a combination of time-tested approaches, modern techniques, and the latest science on the sensitivity of the human ear. The end result is a fully-in-the-box analog mastering sound.