Richard Devine is renowned as an electronic music composer and producer, as well as sound designer extraordinaire. From his Atlanta, Georgia studio, and his company Devinesound, he specializes in the creation of custom sound, music and audio environments for film, television, video games, audio hardware and software, interactive web-based environments, and more. Devine recently switched out his monitor controller for the Dangerous Music Monitor ST with the integrated Dangerous DAC ST D-to-A converter in his massive electronic music studio. “I realized I needed to get a separate DAC that could accommodate multiple digital sources and at the same time output clean transparent audio with a non-fatiguing sound, I didn’t hear any distortion, and could hear so much detail even monitoring at the lowest listening levels,” says Devine. 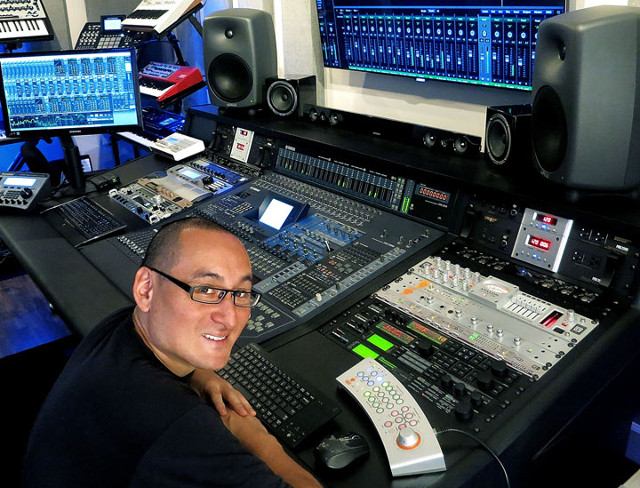 “The end results that I’ve gotten in the last few months that I’ve used the Monitor ST are incredible,” he adds. “The ST and DAC ST are one of the best investments I’ve made in my studio. I’m a complete believer, it’s blown my mind.”

To check the sound of the Monitor ST and DAC ST Devine did some very specific listening test, “I A-B’d the Dangerous gear against my Apogee DA conversion, and also did some comparison tests with the U.A. Apollo, and UFX RME card; and the DAC ST was just spot-on gorgeous.” Devine noticed a marked improvement in sound quality at low volumes with the Monitor ST as well, “I like to mix at lower volumes, and with the ST even at low volumes you get all that macro, beautiful detail, which was interesting to me. I thought, ‘Wow! There’s an immediate difference!'” With his previous controller the quality was not so good at lower volumes, but that is solved with the Dangerous Monitor ST. “I understand now, I’m a believer,” he says, “Having a dedicated DAC for monitoring is essential, especially with these features.”

“I did some tests where I was mixing for longer periods of time and I realized I’m not getting any ear fatigue. The DAC ST and Monitor ST combo has this very silky, clean presence. I don’t hear any distortion. It has a Hi-Fi quality to it.” Devine wondered if there was some kind of distortion in the DA conversion with his previous monitor controller that was causing fatigue in the past. Whatever it was, it’s not present with the Dangerous Music gear, “It’s become a non-issue now,” says Devine.

Detailing his first experience with the Monitor ST and DAC ST, Devine recalls, “I was using another monitor controller before this and I was using the D-A converter in it, and I was always unhappy with the sound quality, I couldn’t really put my finger on what was going on. When I got the Dangerous Music Monitor ST and the DAC ST it was an immediate night and day difference, I was actually shocked! Because in my head I was thinking, ‘I wonder how much of a difference it’s really going to be: huge difference, small difference, or something I am not going to even notice?’-Because the other controller made the claim that theirs was ‘completely transparent’, but it didn’t sound transparent to my ears.

Immediately when I first hooked up the Dangerous gear I was in shock for the first 20 minutes, it was like ‘Wow!’ And then I felt kind of stupid, ‘How did I neglect one of the most crucial components of my signal chain, my monitoring solution? How did I overlook this for so long?’ Which is absolutely just as important as the monitors and the room you’re mixing in. So I was glad to get the ST, it has such a transparent, clean sound.”

Regarding the ST remote’s programmability, Devine also appreciates the ability to store level settings, “It’s so cool that you can set up each of your input and output settings and store them. That’s genius. It’s so nice to have that flexibility all built-in to the remote. It seems like Dangerous Music have thought out really well all the scenarios that you might run into, and it’s very elegant and graceful how they’ve done it. It offers so much more than what my other controller did. I can’t tell you how happy I am!”

“I finished designing sounds for a game called Wolfenstein: New World Order, and I was tasked to make all these impact sounds, sounds that have a lot of low frequency content, a lot of metallic resonating drones, a lot of sounds of actual metal that I recorded,” he explains. “So there was a lot of low-end material, a lot of subwoofer action, because they wanted the sounds to be bigger than life. I have a wireless Bluetooth bar speaker system that’s in the middle of my monitoring area that I do references on for TV work and video games, to test what people might listen to on more of a conventional Hi-Fi-like system.

And what was great about using the Monitor ST is that I was able to very quickly do comparison tests with the subwoofer and soundbar setup to see how accurate the bass levels were. And they translated almost perfectly every time for me, which was exactly what I was looking for. So I feel that I can trust the Monitor ST. You feel a lot more comfortable and confident in what you are doing if you can trust the equipment you are working on. I feel that I can be creative and not worry that there’s something not correct in the signal chain, something causing distortion, or jitter in the clock. Transparency is truth to me and I feel that the Monitor ST has revealed everything to a point where I can very-well trust it.”

On his sound design work, Devine has need for just what the DAC ST delivers, easily selectable inputs, “I use multiple sources for sound design and TV projects, I switch around from Pro Tools to Nuendo, to Logic, there’s lots of formats using various hardware. So I wanted to have a system where I could switch between having 4 different sources digitally and several analog sources that I could A-B against really quickly, and the ST was perfect for that. I have an Airport Express modem running into one port of the DAC ST so I can monitor iPod, iPhone, and then I have a CD player and analog outputs from my main mix down card, my Universal Audio Apollo.

Then I have another source, my Yamaha DM2000, where I have all my synths and drum machines connected. It’s nice to be able to level match all these sources, you can do that very quickly with the ST remote. You have a reference of how loud things are irrespective of different devices that you have connected to the ST. I think that is really cool. The Monitor ST has been a dream.”

In his studio Devine uses several speakers including the Genelec 8250, with auto calibrated DSP and the Genelec sub, the Avantone Mix Cubes, and he is planning on getting a third pair of monitors. The Monitor ST can control switching between all three at the touch of a button on its remote control. “I have separate on and off switches for my Genelec sub, but what’s nice about the ST remote that I really love is that it’s all in one place, everything is easily right at your fingertips,” states Devine referring to the dedicated Subwoofer on and off and the subwoofer lo-pass filter buttons on the ST remote.

On the ST’s headphone monitoring, Devine says, “The headphone output is really nice and beefy and loud, it’s pristine, and you hear all the dynamics really well. I like to do a lot of headphone tests when I’m doing a mixdown on any project. I was pleasantly surprised about the headphone amp level, it has a super loud and clean, clear, and transparent un-fatiguing sound.”

Remembering how he first heard about Dangerous Music equipment, Devine explains, “I have a friend that’s a mastering engineer in the San Francisco Bay Area, Shawn Hatfield, and he’s mastered a good number of records for me. He used to be a producer making electronic music back in the early 90s like me. He’s got an incredible setup and an incredible set of ears for mastering electronic music. I had many discussions with him about correcting certain things in my studio and I noticed that he used the Dangerous Music gear and I was curious about that. He said it’s ‘mastering grade studio gear’ and said you ‘just can’t go wrong’ with it. He has the BAX EQ, and the Liaison to switch the signal chain up, he swears by that. He’s a firm believer. He raved about Dangerous Music to me: ‘If you want clean, pristine results without any kind of coloration – transparent and rock solid – you should check this gear out.’ That’s a good enough recommendation for me! If Shawn digs it then I will definitely go check it out. I really trust his ears.”

For more information about Richard Devine visit his website