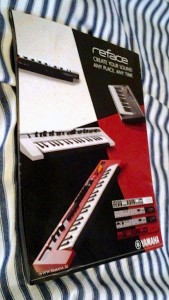 In our never-ending efforts to bring you all the latest gear news, I have taken it upon myself to scour the web looking for more information on the new Yamaha Reface instrument, recently teased in a series of YouTube video clips. The latest information I have slightly contradicts previous reports that this is four instrument engines in one with a possible morphing feature. An image found late on Saturday evening seems to reveal Reface is in fact four individual instruments in a series, rather than just one.

Reface CS – Analogue synth emulation – could be a CS80 clone.

Reface CP – Piano keyboard emulation – could be a CP70 clone.

Reface YC – Organ keyboard emulation – could be a YC20 clone.

Each Reface has 37 mini keys, runs on batteries and has an internal speaker system with a “Phrase Loop” sequence recorder. It also appears that there’s no pitch or modulation wheels, though there could be a way to control this from the front panel, it’s just not known at this time. It’s still thought that there’s a software editor of some sort, but again, there’s just no information on this as yet. More as we have it…