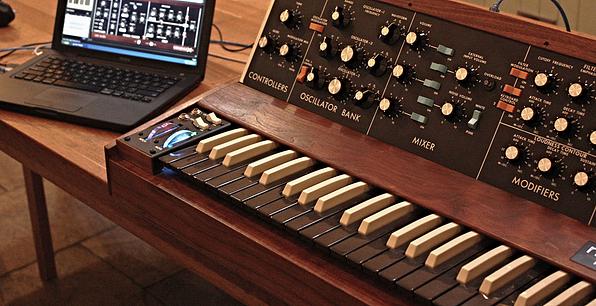 This controller is designed to work virtual instrument software such as the Arturia MINI V or any other software synth that uses CC MIDI control information. The comtroler also has a DSP engine which is built arround the Use Audio Plugiator. The Controller has two Midi Interfaces Inside to Control up to 128 Parameters. It is Mains Powererd it has a USB connection and Midi IN/OUT as well as two jacks for stereo operation.

Paul became interested in synthesisers whilst in his early teens, he was fascinated with the sounds that they could produce. He was intrigued by musicians who were utilising synthesisers in there music and was interested in magazines such as Practical Electronics that featured synthesiser construction projects. Paul constructed some of these projects and this led to the purchase of his first synthesiser the Jen SX2000.

At the age of seventeen Paul studied electronics at college in Glasgow, he did not complete the course as his band Friends Again singed a record contract with Phonogram Records. Paul went on to form Love & Money with his band mate James Grant. Through his career Paul has owned and used many classic synthesisers such as a Roland Jupiter 8, Korg PS3200 and of course a MINIMOOG. Although Paul has been using virtual instruments as part of his work flow he found the lack of hands on interaction frustrating so he decided to build the MINIMOOG controller.