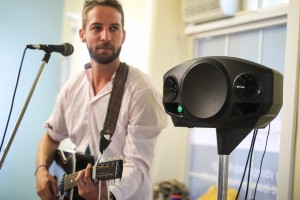 Like many artists, Ryan Barber has a wide range of creative passions. The Seattle-based musician, author, teacher, and composer is the founder of Mr. Ryan’s Music and Books, a multi-faceted creative vehicle that enables him to combine his love of teaching with his passion for music, art, and theater.

Barber maintains a busy schedule of writing, performing, and directing musical theater, and an equally busy calendar of teaching after-school, pre-school, and private lesson programs. These days, one of the most useful tools in his arsenal is the versatile Mackie FreePlay Personal PA.

I do a lot of sing-alongs and performances with the kids, and those can take place anywhere, from a schoolyard to a park to a gymnasium or cafeteria,” Barber explains. “The FreePlay is great as a small PA for the kids to sing along with – it’s powerful enough to cut through the chatter of 20 or 30 kids, and incredibly versatile.”

With classes and lessons at several schools in the metro Seattle area, Barber is also a fan of the FreePlay’s portability. “The FreePlay is compact and lightweight. When I arrive at a school to teach a class, I don’t have a lot of time to carry in lots of gear and get set up. With the FreePlay, I can grab it and go, and still be able to take all my other gear too.” 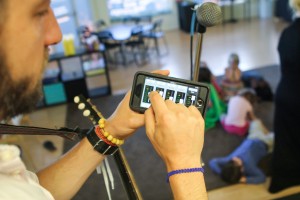 Barber, who has authored the children’s book, The Adventures of Mr. Mop, has also composed its accompanying score and musical. He points to the FreePlay as an ideal system for presenting musical theater. “I created a mix of the backing tracks for the score, and streamed that from my iPhone through the FreePlay, and played acoustic guitar and sang to the tracks,” he reports. “It worked great – I had my iPhone on a mic stand and was able to control my mix as I was performing.”

During the summer months, Barber also conducts music camps, and sees the FreePlay as a boon for those events as well. “With the FreePlay’s rechargeable battery, it’s ideal for parks, campgrounds, and other locations where there might not be an AC power outlet nearby.”

With the upcoming release of his book and accompanying CD in November, Barber is already anticipating putting on a series of performances to promote the book. “I’ll be doing street fairs and other public events,” he says. “That includes me reading the book, playing the music, and singing the songs with an acoustic guitar and backing tracks – FreePlay is perfect for all those things. It’s really an awesome device for teachers, performers, presenters, and anyone who needs just a bit of amplification. It sounds great, it’s easy to use, and it’s portable.”