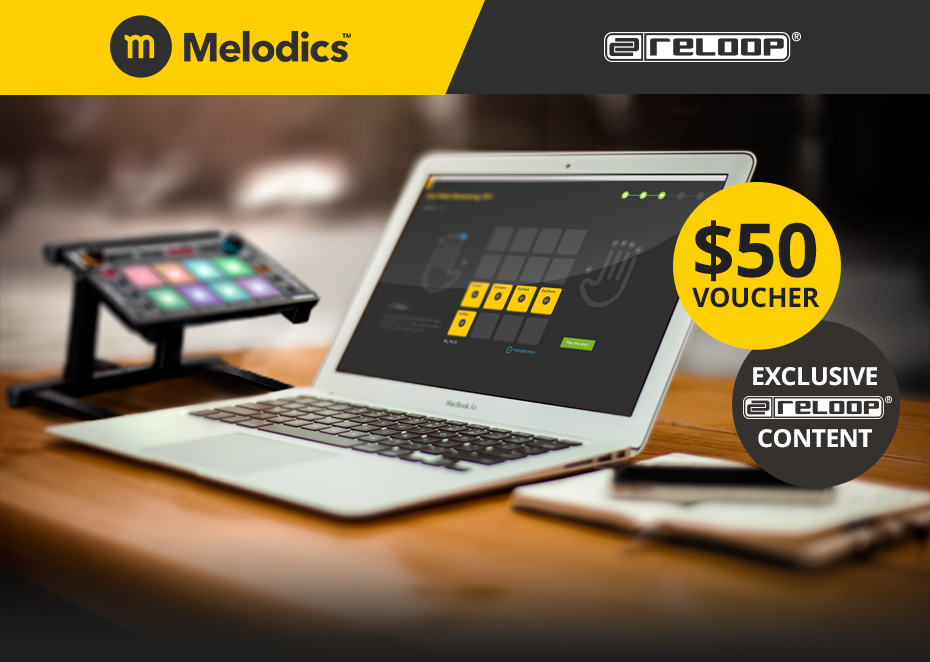 Reloop has teamed up with Melodics to bring you the ultimate tool to build your pad drumming skills. Melodics is an exciting cross between a game and beat-making software, that adapts to your abilities and musical tastes to get the most out of your drum performance. It helps you learn & get better at pad drumming, with lessons produced by huge international artists, DJs and producers like DJ Jazzy Jeff, Nick Hook, and The Gaslamp Killer.

Melodics and Reloop are super excited to give you access to exclusive content and a $50 discount on an annual subscription to get you started on the path to pad mastery! Register either your Beatpad 2, Beatmix 2/MK2, Beatmix 4, NEON, Terminal Mix 8 or Keypad with the serial number. Your request will be processed and you’ll get the promo code via email. Download the latest version of Melodics and install it. Launch Melodics. During setup, you’ll be asked if you have a promo code.

Melodics was conceived by Sam Gribben, Ex CEO of Serato, in the summer of 2014. Having finished up at Serato after a decade at the helm, Sam was ready for something new. He’d worked with some of the biggest artists in the music world, and with the international companies that build the instruments & controllers that they used, and had noticed how important Pad & Cue point drumming was becoming in the overlapping worlds of DJing & production. Thus, an idea was born. “I had drum machines and pad controllers for years, and it frustrated me how hard it was to learn new patterns and beats.

I’ve watched tons of videos from expert finger drummers, but it always felt so hard to develop the dexterity and muscle memory you need.” Sam Gribben – Melodics CEO Not one to leave an idea alone, Sam got busy. Sketches were sketched, a prototype was produced, contacts were contacted, and yep – it turns out it was a good idea. Things snowballed, as they tend to do, and in early 2015 Sam put a small team together, and work on Melodics began in earnest.

The app that you can download now is the result. With several huge international artists on board, and more on the way; with over 100 lessons to play, and more coming every week; and with a team dedicated to helping you get better at pad drumming, Melodics is here. We hope you enjoy it, and we look forward to making it even better in the weeks, months, and years to come.