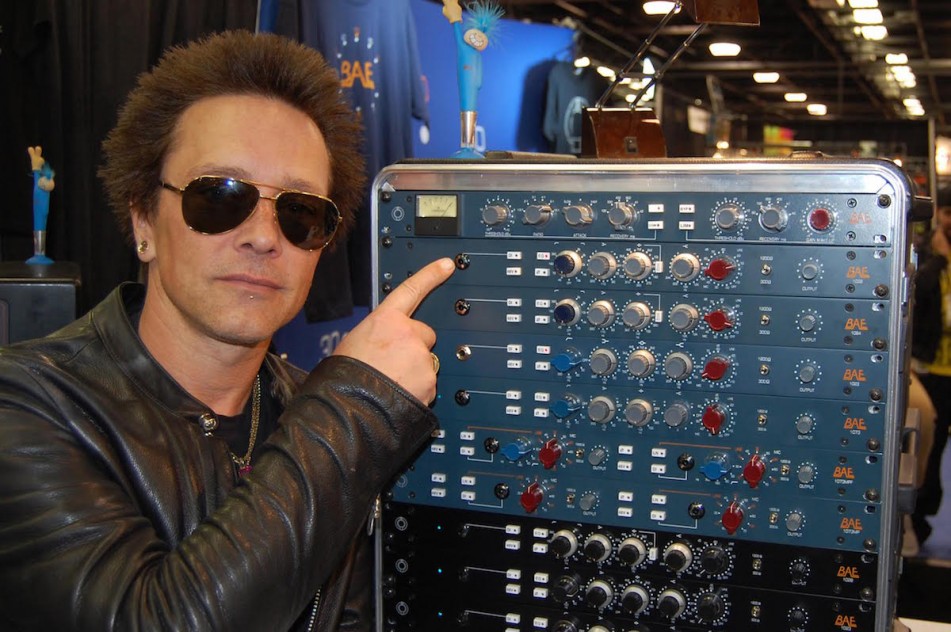 Superstar guitarist Billy Morrison has a busy schedule. Whether he’s gearing up for a Las Vegas residency with Billy Idol, recording and releasing solo albums with collaborators like Ozzy Osbourne, or playing top LA venues with Dave Navarro in their band Royal Machines, Morrison is perpetually evolving as a songwriter and multi-instrumentalist. Since time is always of the essence for Morrison, having the capability to lay down ‘no-compromise quality’ guitar, bass, and vocal tracks at his home project studio is a must. His go-to signal chain is a ‘modern vintage’ combination of the BAE Audio 1073 preamplifier and 10DC compressor, both of which stand at the ready to capture his sounds with the renowned analog warmth of old-world vintage consoles.

Becoming Re-acquainted with an Old Friend
Morrison knew about BAE Audio gear well before it became a key component of his home studio setup. “Having a recording career for quite a long time, I knew exactly who BAE Audio was,” Morrison says. “I’ve worked with a lot of different producers and writers, many of whom had BAE gear in their rack,” including frequent collaborator Steve Stevens, he notes. Before long, Morrison acquired a pair each of BAE Audio 1073 rack units and 10DC compressors for himself. “I try to invest in the best compressors and preamps I can get on the premise that if I don’t like the music that comes out I know it’s not the gear’s fault, I just don’t like my songwriting,” he jokes. “BAE gear is as high in quality as you can get in audio engineering, so I know that sound-wise, everything I record will be top notch.”

Vintage Sounds You Can Count On
Morrison takes a somewhat unusual approach to setting up the signal paths in his studio. “There’s no patch bay — it’s all about having quality, dedicated signal paths for specific inputs,” he explains. “I’ve got dedicated chains for guitar, bass, and vocals, which are always set up and ready to go.” Morrison’s bass guitar and vocal chain both sport the BAE 1073 and 10DC combination. The 1073’s Carnhill St. Ives transformers bring an authentic dimension of warmth and clarity to his bass guitar tracks, helping them sit easily in a mix. Also, Morrison says the 1073 is especially versatile on vocal applications: “Once you start to understand the sweepable EQ on the 1073 and what different amounts of gain do to a signal, there’s almost an infinite amount of tweakability when you’re setting up a vocal sound,” he says.

The sweet analog compression of the 10DC has been a standout for Morrison. Though his two 10DCs are racked to be ready for bass and vocals, he is not afraid to send other sources through their transformer-coupled, all-discrete circuitry. “The 10DC is my secret weapon for every instrument and on vocals, it’s my absolute favorite thing,” he reveals. Morrison is particularly effusive about the improvements his BAE Audio gear has brought to light in his vocal chain. “Before I had BAE in my rack, I went through all kinds of different preamps and compressors. But I always felt like they colored the sound when I didn’t want color, and when I wanted color I couldn’t get the right color. It’s easy to get a great sound with the BAE Audio gear,” he says. “It’s crystal clear when that’s the sound you want, and beautifully colored when you need it to be.”

Mix-Ready Tracking at Home
Now, after having integrated BAE Audio in his set-up, Morrison is able to track the bulk of his records at home. “Two thirds of my most recent solo album that came out last month, God Shaped Hole, was tracked at home — pretty much everything except drums,” he says. “Now, there’s no need to make demos. I’m already recording things at the highest level of quality from the get-go.” Morrison knows that his BAE 1073 and DC10 rack units will remain part of his signal chain for a long time to come. “Whenever I record I use the BAE Audio gear,” he says. “It’s in the rack for a reason — I love it and everything gets plugged into it.”