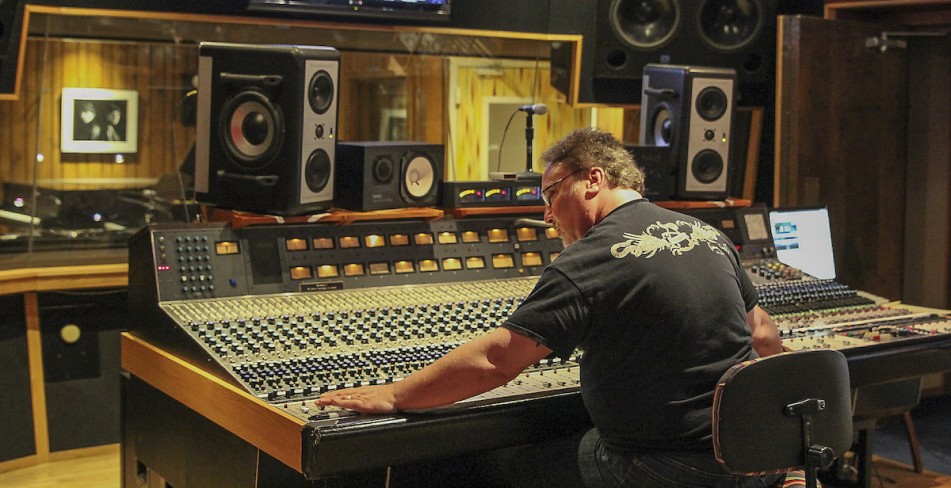 f w
h
fFacebook wTwitter gGoogle+ pPinterest
For those of us dedicated to the craft of music, there is no greater pleasure than time spent creating a great recording. Capturing the essence of an artist is a process that transcends musical genres, instrument choices, and recording technology – it all comes down to the song.
Such is the work ethic of producer/engineer Ross Hogarth. His three decade-plus career has careened across the musical map, from the dulcet tones of Shawn Colvin and Keb’ Mo’ to the lead-footed velocity of Motley Crue and Van Halen. But if there’s a common thread across this eclectic discography, it’s one of authenticity. Hogarth’s recordings never fail to bring out the quintessential spirit of his subjects.
That authenticity extends to his equipment as well. From his early days as an engineer at legendary studios like Rumbo Recorders and the Record Plant to his present day work for his own Hoax Productions, Hogarth’s recordings have relied on Manley gear. As he explains, his roots with the company are deep.
“Back when I worked with Jackson Browne, EveAnna and (then-husband) David would bring their gear down to Jackson’s Groove Masters Studios for us to check out,” Hogarth relates. “So I’ve got one of their original first-generation ELOP optical limiters, and it’s always been my go-to compressor for tracking, particularly for vocals. I’ve used it on everyone from John Fogerty to Melissa Ethridge to Ziggy Marley. For me, the ELOP has always been the benchmark for an optical compressor. It’s got that lush creaminess of a classic compressor, but with speed and clarity, and without being mushy.”
“The ELOP has always been my set-and-forget, go-to box for tracking, particularly for vocals,” Hogarth adds. “Once you imprint the ELOP on a vocal, you can do pretty much anything with that vocal later in the mix. It’s basically a vocal compressor that takes the Hippocratic Oath.”
In the 1990s, Hogarth would move to the Record Plant, and his relationship with Manley Labs would grow. “While EveAnna and their engineering team were designing the Massive Passive, they brought me a lot of beta units to test,” he recounts. “I had a lot of input into the design details like frequency points and different curves, and I’m very proud to have been a part of that. Needless to say, the Massive Passive is also one of my favorite pieces of gear.”

Not surprisingly, Hogarth’s trusted ears also contributed to the evolution of the new ELOP+. “EveAnna came to me last year and said they wanted to redesign the ELOP – how could they make it even better? And we agreed, there are certain things you can change, but ultimately it needs to be like the original. There have been a few iterations of the ELOP over the years, but to my ears, my original first-generation ELOP still sounded the best. The new version had to have that original sound.”

As with the evolution of the Massive Passive, Hogarth provided feedback on several prototype units. “We spent a lot of time on it going back and forth, and every iteration they would bring me was a little bit closer. We even got into minute details like the frequency of the side-chain filter and the lights on the front panel. We finally achieved something where I can honestly say, you nailed it – it sounds great.”
“I’m really proud to have been a part of it, and I’m really proud that EveAnna and her engineering team cared enough to make this better than something I already thought was great. A lot of companies design something, have beta testers try it out, and the testers don’t want to insult anyone by saying it’s not up to their standards. That’s the beauty of being close friends and having known EveAnna this long – she knows I’m going to be ruthless and straight up with her. I’m not going to tell her it’s good until it’s really, really good.”
Even then, Hogarth admits, it took a while for him to fully commit. “When I finally said it’s good, you guys have done it, I got my ELOP+ and put it into a rack with my old one. I tested it out for two months, tracking on one and then the other. And I can honestly say, the ELOP+ has replaced my go-to compressor of more than 20 years.”
Tagged: ELOP+ interview Manley Ross Hogarth Studio
Share this post:
Tweet