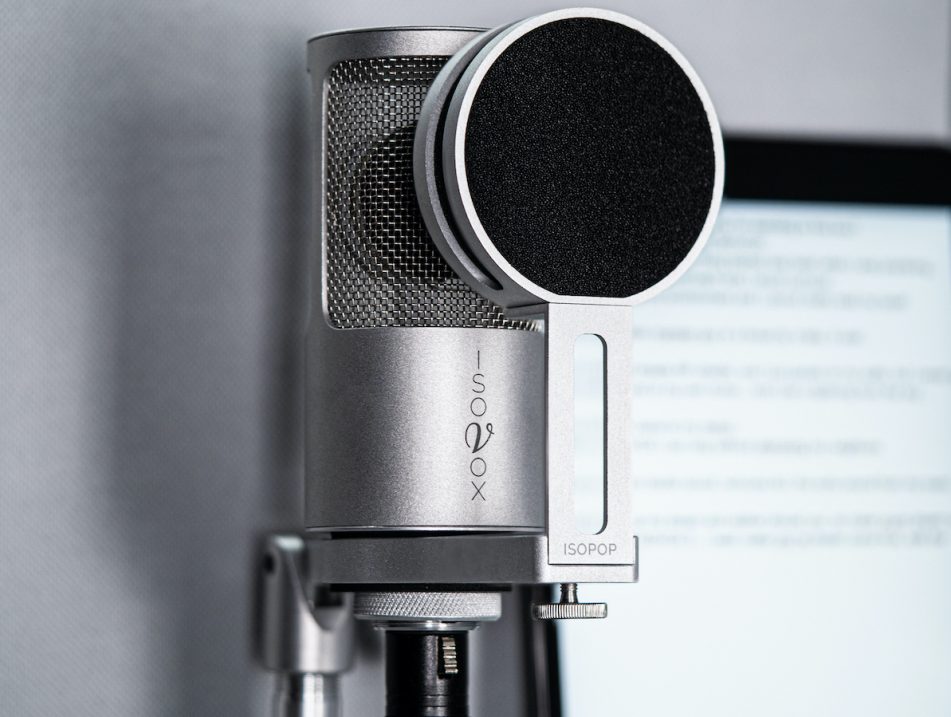 ISOVOX is proud to introduce ISOMICTM — a masterly microphone technically tailored for voice recording within its innovative ISOVOX® 2 vocal booth namesake (featuring four layers of super acoustic materials with patented 360 XYZ Pro Acoustic Construction to control sound waves from all angles), guaranteed to capture voices like never before, thanks to the trailblazing patented triangular capsule, capable of delivering a radio-ready sound with an ear-opening 7 Hz to 87 kHz frequency range

As a successful start to its innovations, Best In Show, the popular NAMM University breakfast panel discussion, name-checked ISOVOX’s ISOVOX® 2 vocal booth namesake at Summer NAMM 2017 in Nashville, TN, USA; ultimately enhancing vocal details and reducing overall volume while creating a warm and punchy sound without any detrimental breathing particles, unlike any other portable product, it instantly found favour with the likes of multi-million-selling British singer-songwriter Seal, who was musically moved to comment: “Irrespective of whether you may be on vacation where you’re in a room and it’s got lots of reflections, or a room that is perhaps not ideal for recording vocals, you can now create your own environment with ISOVOX; it’s just a game changer, and it was the missing piece in location recording for me.”

Most commonplace condenser microphones have been tested for use with ISOVOX® 2 by ISOVOX itself, as outlined online in its convenient compatibility list, yet creating its own condenser microphone technically tailored for voice recording within the game-changing ISOVOX® 2 vocal booth was a perfect fit for following up its inaugural innovative product with another like no other. ISOMICTM is guaranteed to capture voices like never before — thanks to the trailblazing patented triangular capsule, capable of delivering a radio-ready sound with an ear-opening 7 Hz to 87 kHz frequency range — but getting there was easier said than done.

During the developmental process, the ISOVOX team turned to working with fellow Swedish company Research Electronics AB, owners of the Ehrlund Microphones brand, to create the ultimate voice microphone for the ISOVOX® 2 vocal booth by making full use of that trailblazing triangular technology developed by Göran Ehrlund himself when working with highly-advanced water leak correlation analysis modules. More meaningfully, Ehrlund discovered that the shape determines the impulse response, and the most superior shape for capturing sound was triangular. The resulting patented invention now proudly carries his name as the Ehrlund Capsule. That triangular capsule features a membrane with a recovery movement that is three times faster than a circular one; it is therefore able to pick up transients that would otherwise be left unheard.

As implied by the Ehrlund POWERED wording boldly blazoned across its aluminium body (with glass bead blasting finish), that triangular capsule moving at the heart of ISOMICTM itself results in a sound that can be described as rich, deep, and crystal clear — perfect for modern-day voice-over artists and vocalists alike. Its impressive 7 Hz to 87 kHz frequency range notwithstanding — albeit all impedances are also handled without altering the frequency response, ISOMICTM includes a number of other impressive specifications, such as a SNR (Signal-to-Noise Ratio) of 87 dBA, DR (Dynamic Range) of 115 dB, and a maximum SPL (Sound Pressure Level) peak performance of 0.5% THD (Total Harmonic Distortion) at 116 dB or 1% THD at 122 dB. Indeed, ISOMICTM also has an extremely low equivalent noise level of <7 dB (A), making audio editing easier than ever — less time spent removing noise and more time getting the job done, in other words.

While ISOMICTM conveniently comes complete with an ISOPOPTM (working with its integrated filter to act as a double pop-removal zone) alongside other original accessories, it is when positioned inside ISOVOX’s innovative ISOVOX® 2 vocal booth that the results really stand out from the sound of the voice recording crowd at home or away — and all without disturbing any neighbours!

ISOMICMT is initially available in the US in mid-October with a MAP (Minimum Advertised Price) of $1,299.00 USD, while Asian and European availability — with an SRP (Suggested Reseller Price) of €1,299.00 EUR (including VAT) — will follow at the end of October/ early November