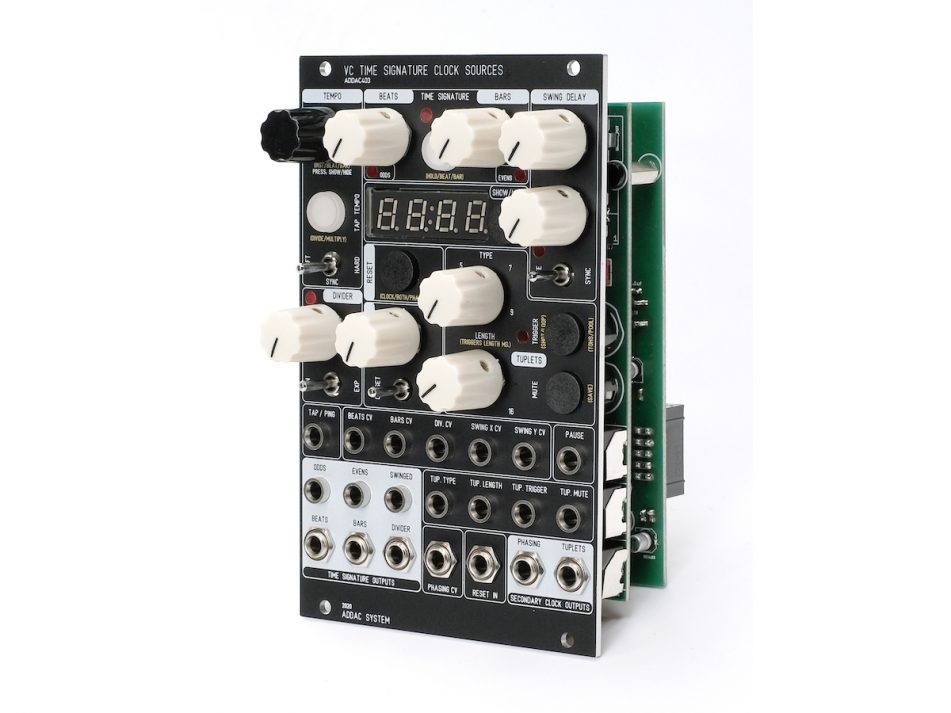 ADDAC403 — available in January for €350 — is capable of producing standard time signature musical notation, but it is also possible to generate syncopation, irregular tempo ratios and phasing all at once — all in a single, straightforward unit. The module features an extremely stable digital clock with over time drift compensation, adjustable to any BPM up to 1 decimal case (from 0.1 to 250.0 BPM). Also, there is a tap tempo button and pingable input for syncing to external clocks using either soft or hard sync modes.

In addition to comprehensive time signature and divider sections, a phasing section features a totally independent clock that can run in two modes: Tempo, running at a slower/faster BPM phasing in and out of tempo against the main clock; and Offset, which runs at the same BPM but offset and delayed against the main clock generating a steady syncopated beat.

Four modes allow different trigger and mute functionalities, which can run in a loop or in a ‘one shot’ mode. Among other features, a ‘Swing Delay’ section allows delaying one beat at certain beat intervals, and a dedicated delay knob defines the delay in a fraction of one beat — also allowing the generation of syncopated beats.

Each section of the the ADDAC403 features its own LED, and by default, the default display shows the current time signature status. By pressing the [SHOW/MENU] button, it will display each section setting in sequential order. All settings on the unit can be saved to a single memory slot, and upon startup the memory state will be automatically loaded. Further, all knobs and push buttons have their own dedicated CV/trigger inputs, except the [BPM] encoder and [SHOW/MENU] button.