UK-based newcomers Sound Pressure Level are X Factor 2011 participant Roxy Yarnold, Sammie Ellard-King and Alex Wallace who have recently been recording their debut long player The Recipe in Soho Sonic Studios, situated in the heart of London. Production team UPIA, owned by OJ (Ofer Shabi) and Sefi Carmel, produced SPL’s entire album in Cubase 6. Steinberg met up with OJ to talk about the band and the many projects he’s previously been caught up in. 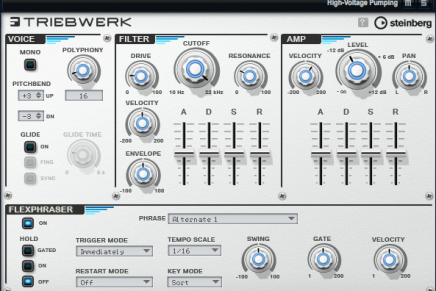 Steinberg today released its latest VST Sound Instrument Set. Triebwerk is a sound expansion pack for HALion 4, HALion Sonic and HALion Sonic SE, boasting more than 400 presets, created for pop, house and everything in between by renowned sound designers and industry professionals.

Steinberg released the trial version of HALion 4. With its top sampling and mixing engine, the virtual analog synthesizer and countless other features, HALion 4 provides a versatile solution to consistently push the envelope of sound design.

Steinberg announced last week that most Steinberg products run flawlessly under Apple’s latest operating system, Mac OS X 10.7 Lion. The majority of Steinberg products are Lion compatible; however, further development is required to ensure overall compatibility through the entire product range. While the testing phase was completed prior to the release of Lion, Steinberg will release patches and driver updates for current products with remaining issues.

Steinberg recently unveiled HALion 4, the latest and most powerful incarnation of the industry-acclaimed VST sampler. With a cornucopia of innovations and improvements, including a state-of-the-art sample engine, a complete synth section and inspiring tools and effects, HALion 4 is set to be the new global standard for professional sound design.

After winning plaudits at the Frankfurt Musikmesse for presenting the new HALion 4 VST sampler and sound creation system, Steinberg is now shipping the latest version of its acclaimed virtual instrument.