If this would have been presented one week ago, we would have laughed on the concept of the CG-8 Visual Synthesizer. But it isn’t an April Fools hoax. This ‘thing’ is for real!


Edirol have announced a unique and innovative product. According to Edirol:

Introducing a new way to interact with visual performance

Just as synthesis in music prompted new waves of musical creativity so the CG-8 is set to do the same for the visual artist. A sampling synthesizer takes audio in or regenerates it from a wave generator and then modulates it with filters and amplifiers before outputting the sound. In a similar fashion the CG-8 can take in still images, create motion pictures from these and then modulate them with Modifiers and Fade Controller. It’s easiness to grasp, and user-friendliness allow artists to concentrate on making stunning visual displays without getting caught up in complicated operations. Starting with picture files (JPEG’s) as the prime source, stamps (PNG) used for overlays and built in Computer Graphics, all stored on the internal hard drive, the CG-8 can add any of more than 200 Photo effects and then from more than 60 Overlay effects before finally passing the output to the image modifiers which let you add further motion along X/Y/Z axes and control background color/hue shifting. This final modulation can control rate, depth and waveform just like the LFO in an audio synth. 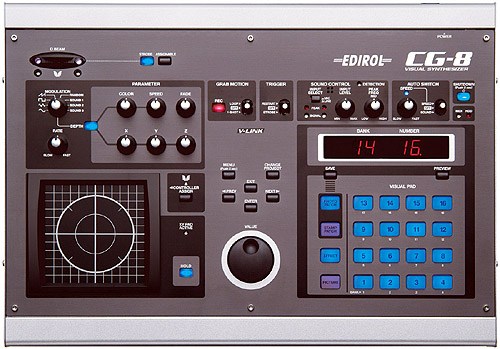 Variety of effects and controllable parameters – The CG-8 features more than 260 dramatic effects. In combination with these effects and a variety of parameters, like X/Y/Z 3D dimension, Color, or Speed, you can create amazing moving images from still images easily and quickly.

* Up to 128 patches per project
Save all the elements and manipulative effects associated with a single image in a patch for instant recall during the performance.

* Trigger Effects and Parameter Changes from the Audio Input
The CG-8’s visuals can be controlled by and synced to an audio source. The Internal Microphone or Line input can detect frequent peaks which will animate real-time changes to the visuals.

* MIDI and V-Link Controllable
With MIDI and V-LINK capability, the CG-8 can be externally controlled by a familiar device such as a keyboard controller, V-Synth or V-Drums.


More detailed information can be found on the Edirol website: www.edirol.com/products/info/cg8.html