As soon as we get the pictures from the Messe and more details we will let you know.

As promised we searched for more information on the New Nord Stage, and we got a few details from Clavia. The Stage is not quite based on the Electro and Lead 3. However the Stage will contain an Organ, Piano adn a ONE-Oscillator synth engine. All three sections can be played as stand alone or in combination. As well the FX unit, Compression unit and EQ unit. 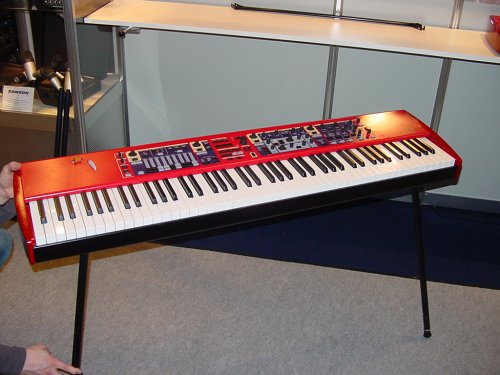 The features of the new Stage:

– hands-on access to each parameter directly on the panel

– 6-voice multitimbral: 2 manuals of the organ, 2 pianos, and 2 Synthesizers

– Vox and the Farfisa organs

– Equalizer, vibrato, a glide function, and a continuous unison knob

April 7, 08:56 Update:
More and more details are coming available on the internet. Here are the latest details on the Nord Stage:


1. The Nord Stage is designed to be a companion to the Electro2, not a replacement, hence the evasion of naming it an “Electro3”, or “Electro2.5”, or even “Electro2 88”.

2. Part of Clavia’s goal was to make something that was a more *pianistic* instrument: weighted action, 88 keys, high-quality acoustic and electric pianos … plus the organ and synth sections. Kind of a flipped Electro2 concept; except, instead of the organ section being an afterthought, it’s better than it ever was!

3. There are still a few naysayers here who think they’ve been totally abandoned and ignored by Clavia. May I state yet again – There ARE new Electro2 sounds coming out! This spring! Probably after the Stage moves into the mass production phase. I *have* heard one of the sounds – a resampling of the factory-supplied acoustic piano – and it sounds WONDERFUL. Night and day between the “re-ported” sound and how it originally sounds on the Electro2.

4. Yes, the Stage has 88 fully weighted keys. I have not personally felt the action, however it is promised to be expressive and stage- worthy.

6. Clavia has not stated an MSRP yet.

7. Clavia is aiming for a summer ship date. Summer can mean May …

Thanks to Jason Stanfield – Nord USA, as posted on the NordElectro List.


First image we found on the net of the Nord Stage: 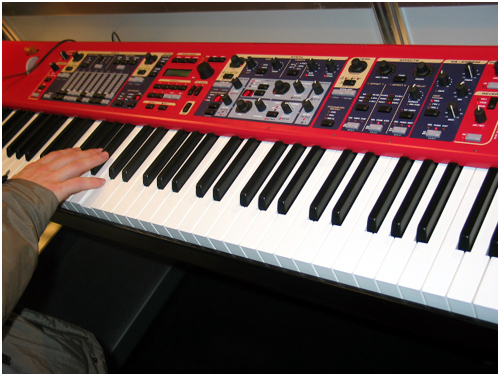 It is official now. Clavia is presenting The Ultimate Stage Piano!

Easy Control of Other MIDI Gear