One of the bright spots in the 2010 summer tour season has been the Brad Paisley H2O Tour, a fan-friendly affair that offers exceptional entertainment value. Two iLive-T digital consoles were chosen to run the two-hour pre-show concert at the “Water World Plaza Stage” just outside the main venue on a portable stage set-up. Up-and-coming country stars Steel Magnolia, Easton Corbin and Josh Thompson perform, with over 5,000 fans typically attending the Water World Plaza Stage. 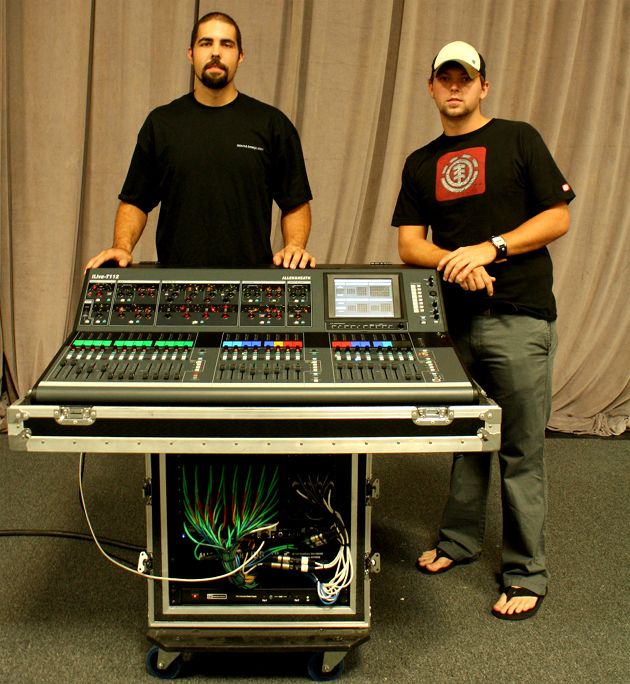 To meet the logistical challenge, audio provider Sound Image selected the 2 Allen & Heath iLive-T 112 digital mixing consoles for both front of house and monitor duties. “With three bands and five-minute changeovers in between, there’s a lot of action,” says monitor engineer Scott Ferguson. “But Bill and I both have our scenes set for the next band long before the stage is reset. I’ve got to say the iLive-T is extremely user-friendly and makes my job easier than a lot of other digital consoles would.”

FOH engineer Bill Chase agrees. “The iLive takes console setup out of the equation for us,” he states. “The order of the bands changes every day, so we have scenes for each console that only bring up the inputs we need. Up on stage, we keep the entire backline on stage for the full show, and all three bands share a drumkit, bass rig and mic package. I just have to move mics between guitar amps between acts, which happens pretty fast. If it wasn’t for guitar tunings, we could probably do it in under three minutes.”

Both Chase and Ferguson are first-time users of the iLive console. Their first exposure was at Sound Image’s annual employee seminar event last winter, but both got their hands-on baptism during tour rehearsals in early May. “We didn’t even have an iLive in the Nashville shop until just before rehearsals,” Ferguson recalls, “so I read up on it online, downloaded the software and set up a show file on my laptop. As soon as the consoles showed up in our offices, they went straight into rehearsals. It was pretty easy to pick up.”

Bill Chase is especially fond of the iLive’s customizable interface. “It’s great being able to move my channel strips where I want, so I can have the inputs and DCAs I want right at my fingertips. That’s one of the things I like when I first started getting into this console. It’s made a big difference in the way I’m mixing the show.”

In monitor world, Scott Ferguson is running stereo in-ears for all the bands, with an added subwoofer wedge for the drummer. Out at FOH, Bill Chase’s output configuration includes stereo mains, plus a pair of frontfill outputs, deployed via the console’s matrix, and a dedicated subwoofer pair. “I really like the console’s dedicated sub preset, because it’s differentiated from a regular Aux Send, and it’s always on the surface. Very cool design.”

After helping set up Paisley’s main PA in the morning, the two engineers move to the Water World Stage in the afternoon. Scott Ferguson handles the mic placements, with Bill Chase doing final tweaks before moving to FOH. Typically, the first act takes the stage at 4:45 and things continue until 6:25, just before the doors to the main venue are opened. “There’s no time for sound checks, so we use the same presets every day,” notes Ferguson. “We might have to do a little tweaking, maybe due to traffic noise, or if we have to set up near a brick wall, but the EQ and effects on this desk make that pretty easy.”

The post-show procedure is equally streamlined. “We’re expected to get out by 8:00, including PA, lights and stage,” he says. “The first thing I do is save my scenes. If I made any changes, I make a new scene. Then I go to my show file, archive the show. I do that every show, save it to the console and then again to a memory stick. After that, it’s the physical tear-down.”

Both engineers appreciate the iLive’s physical design and DSP engine. “I remember thinking at first that it was weird, having the channel strip sideways, but it’s very easy to get used to,” says Chase. “I love having that large area to work with, with all the features spread out so you can’t grab the wrong knob. The quality and quantity of available effects is very nice. You don’t have to sacrifice graphic EQs for FX. I’m able to have separate FX for different vocals, a different reverb for toms versus snare, etc. It’s got a little warmer sound than most digital desks, and having a side chain on the compressor and gating is definitely a step up from other consoles in that price range.”

In fact, Chase is using the iDR effects engine for both individual channel inputs and to fine-tune his PA outputs. “Our PA crossovers, hi-passes and driver delays are set within our amps, but I’m also using the iLive’s output parametric and graphic EQ, plus delay settings to time-align the frontfills and subs to the mains. It’s a pretty powerful machine.”

As an example, Scott Ferguson mentions the iLive’s RTA function. “Being able to use real-time analysis on the iLive to meter the frequencies is a great tool for jobs like ringing out wedges. Being able to just see the bad frequencies at the console and immediately cut them made things very quick, a lot more painless. That’s a good example of how this console is designed make things more efficient on tour.”

“The way I see it, this console is ideal for sound companies, because every tour and every engineer can configure it in a way that’s comfortable for them,” concludes Bill Chase. “The fact that Scott and I use the same console for both house and monitors, and we’re both happy with it, says a lot. Based on my experience, I’d say the iLive-T 112 is definitely a multi-act, tour-worthy console.”