The Waldorf PPG Wave 3.V is the reincarnation of the legendary PPG Wave synthesizer, which is arguably the most coveted high-end synthesizer of the 1980s and developed by Wolfgang Palm. On countless hits, the sounds of this instrument can be heard. It has inspired a whole generation of producers, composers and listeners and impressed them. While the original PPG Wave System was offered at the price of an average car, it was only affordable for a few top musicians and producers. However, now anyone can enjoy its awesome sound character in their VST or Audio Unit host. 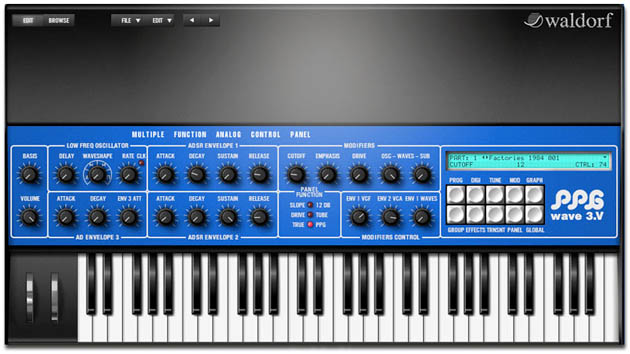 The PPG Wave 2 was the first digital wavetable Synthsizer with analog filters, that created new sound worlds and possibilities. A short time later, the PPG Wave 2.2 was released and made history. With a huge arsenal of waveforms the PPG Wave 2.2 is not only well-known for its analog sounds, but also bells, choirs and extremely brilliant digital sound, and even until then unheard sensational sound patterns, which consisted of up to 64 different waveforms of these wave tables.

The technical possibilities of this time, however, brought issues up such as aliasing noise, which could not be avoided then, but now make up the charm and character of the PPG.

To recreate the sound of the original, heard on countless hits, as closely as possible, original developer Wolfgang Palm was also involved in the development of the software counterpart. “We are proud that Wolfgang has always been helpful with advice and tips in order to reproduce the original sound,” says Waldorf-CEO Joachim Flor.

The combination of digital waveforms and analog filters of the hardware PPG’s caused quite an incomparably rich and expressive sound that is accurately reproduced by the Waldorf PPG Wave 3.V to the smallest detail. The Waldorf plug-in form even after different versions of the original. In addition to the PPG Wave 2.2 the Wave 2.3 and the Wave are also available to choose from. Also, the aliasing can be changed on request, as the sound of the PPG Wave 2.3 and the PPG Wave 2.2 was different. This way users users can choose which alias is created. You can also set cutoff and resonance differences.

Depending on the host computer the Waldorf PPG Wave 3.V may produce up to 256 voices per instance. Per voice, it offers two wavetable oscillators with selectable sample playback in 8, 12 or 32 bits. Also, a certain analog “imperfection” is simulated, which supports the basic warm and fat sound.

To enhance the sound library of the plugin, you can load samples via drag and drop, or the file-selection dialog. With the 8-way multi mode, it is even possible to play back multi-samples and to refine the sound with the charm of the original.

The sound production follows a 12 dB / 24 dB low pass filter, which is an authentic replica of the filter of the PPG Wave 2.2/2.3. An overdrive behind the filter provides additional sound options. Next to LFO modulation sources there are three additional envelopes to choose from, corresponding to the slightly coarser resolution of the original modulation. If needed you can also select finer settings.

The original PPG distinguished itself by its unique user interface, because the “Analog Control Panel” provided direct access to the most important sound parameters, whilst the digital menu pages presented the digital innards in numbers and cryptic abbreviations.

The Waldorf PPG Wave 3 V recreates this intuitive interface, however the parameter names and values shown are a little easier to understand so users always know which values they just changed.

Almost all parameters can be accessed via host automation and most of the parameters also support MIDI controller automation, so that the Waldorf PPG Wave 3.V can easily integrate into any existing production environment.