At the 2010 AES Convention, Rupert Neve Designs announced the company’s first foray into the 500 Series with the Portico 517 Pre/DI/Comp module. Based on the Portico 5017 Mobile Pre, the 517 provides world class, transformer-coupled preamp, compressor and DI circuitry, with Vari-phase, Silk and DI/mic blending capabilities for $950 U.S. list. 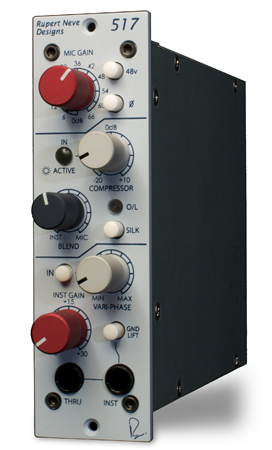 As with other Portico Series modules, the 517 provides industry leading sonic performance with a versatile feature set capable of functioning in many different capacities. The same engineer could use a 517 as an inexpensive means to add new high-end analogue mic amplification, instrument amplification, vari-phase adjustment and compression to his or her studio while also utilizing the 517′s unique DI/preamp blending functionality. The Portico 517 is like a Swiss army knife for the lunchbox.

For Rupert Neve Designs Marketing Director, Tristan Rhodes, the move into the 500 series makes perfect sense: “Engineers have been requesting that Rupert design modules for the 500 Series for years now, and with the 517 we’ve developed a module that really takes the format to its limits. To be able to offer a Rupert Neve Designs preamplifier, instrument amplifier and compressor with the same transformers as the 5017 in a 500 Series module is simply tremendous.”

The Portico 517′s microphone and instrument amplifiers provide the sweet, musical response expected from a Rupert Neve design. With ultra-low distortion, exceptional bandwidth and the flexibility of Silk, the 5017′s amplifiers can faithfully reproduce and even enhance every detail captured by a microphone or instrument.

Used as a single channel device for instruments, the 517 can be used to phase align, combine and compress direct and amplified signals. To achieve this, the instrument’s direct signal is sent to the DI input and the speaker cabinet signal via the mic preamp input. The blend control is used for mixing direct and amplified signals to achieve the desired tonal blend between the two sources, and the Vari-phase control is used to minimize or attenuate phase cancellations between the two signals. The compressor can be applied to both channels. This technique could also be used to create a single, mixed output of a guitar and vocals or any other pair of sources.