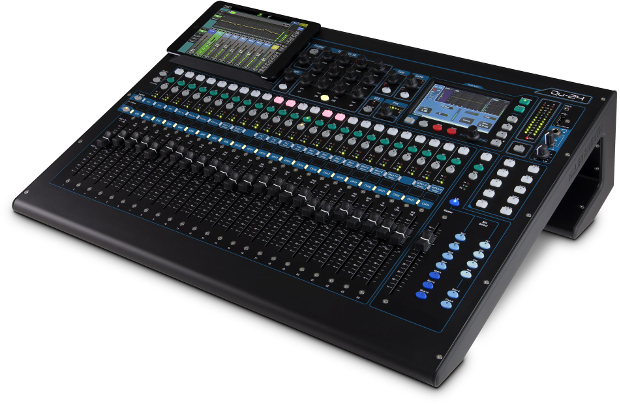 Qu-24 is equipped with a high resolution (800×480) full colour Touchscreen featuring the easy to drive ‘Touch Channel’ access to channel processing, the FX racks and all the setup and system management controls. In keeping with the iLive user interface, the SuperStrip provides control knobs for a selected channel’s key processing parameters, such as gain, HPF, parametric EQ, gate threshold, compressor threshold and pan.

Qu-Drive, the mixer’s integrated 18-channel USB recorder, works with an external USB drive to record and playback multi-track and stereo audio .wav files. The USB interface can also be used to store scene and library data for archiving and later recall. If using the Qu-24 in the studio, there is also a USB audio 32×30 streaming interface for record and playback to Mac DAW systems.

A&H’s proprietary dSNAKE low latency audio connection enables the mixer to connect over a single Cat5 digital snake to a remote audio rack, such as the AR84 or AR2412, and is compatible with the ME personal mixing system.

Motorised faders provide total recall of mix levels and switching between layers, which allows instant access to all channels and masters or the Graphic EQs. To customise the fader layout to suit certain applications, a third user definable layer is also available.

There is a free QuPad app giving wireless control of the mixer’s key parameters and settings, enabling the user to tweak the PA, adjust the monitors on stage, and even mix the show from the audience. The app connects to the mixer via a Wi-Fi router plugged into the Ethernet control port.

The 24 mic/line inputs feature crystal clear AnaLOGIQ total recall pad-less preamps, optimised for transparency and low harmonic distortion. In keeping with the excellent audio quality, the Qu-24 is equipped with many of the iLive pro touring series’ FX emulations, used by many engineers in place of top-end plug-ins and external FX units, including classic reverbs, gated reverbs, delays and modulators.

Rob Clark, A&H R&D director, said: “Building on the key features of the hugely successful Qu-16, Qu-24 is an exciting follow up. During the design process we aimed to retain a compact format with all mic inputs on one layer, with extra matrix, groups and FX sends to suit larger applications.”