On the NAMM in 2014 sE Electronics introduced a new large-diaphragm microphone, called the Magneto. Together with the X1 and X1R this microphone makes the sE Electronics budget line complete. With the help of the Dutch distributor (Total Sonic) we set up a comparison test with the AKG Perception 200. 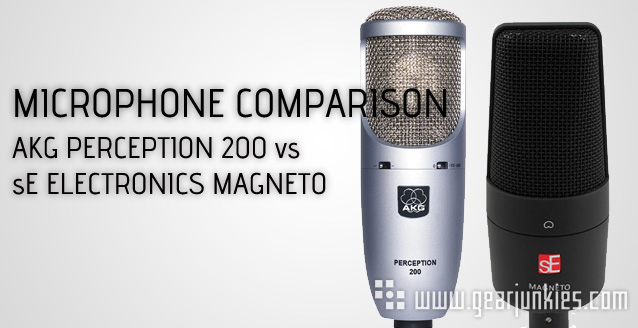 We have tested these microphones with recordings of vocals and acoustic guitar. Both were recorded seperately to get a good comparison between these two microphones. A Steinberg MR826 CSX was used as a pre-amplifier. The first detail I noticed was the fact that the AKG was a lot heavier then the Magneto. This isn’t a disadvantage as it has no influence on sound quality.

First up was the Magneto. Immediately I noticed, while monitoring, that it had a clear and open character. At high notes the sound stayed its ground and didn’t get boosted. At the mid tones it kept the same character. At playback of the recorded vocals I expereinced the same in the sound.

With the AKG Perception, with the same distance to the singer, I noticed a slight too much amplification in the mid frequencies. The high tones sounded the same as the sE. When I placed the microphone a bit further away the problem got solved. However, now the high frequencies got lost a bit. Something which concerned me slightly as the AKG is my personal microphone that I use in my studio for years. So ‘one – zero’ for the Megnato.

For this I am using a acoustic ‘western’ guitar and start off with the AKG. The mic is placed 30-40 cm’s in front of the guitar soundbox. After some simple chords, playing from soft to hard, I hear what I always hear. A little crosstalk of my fingers sliding over the fretboard. From experience I know I usually ‘fix this in the mix’ with a little EQ’ing. Soundwise the AKG sounds open and clear throughout the whole frequency spectrum.

The Magneto is placed at the same distance, I play the same chords and … hey! There’s less crosstalk and the mic keeps its ground next to the AKG. In the low end it does sound abit more ‘pinched’. However, no annoying ‘finger, string’ crosstalk that I need to fix later on with EQ’ing. The Magneto sounds equally open and clear. Something I did expect after listening to the earlier recordings of the vocals.

If I compare the recordings of the guitar between the two I must say it’s a draw. Both mics do their job well. However, overall I tend to lean towards the magneto now as this microphone sounds a bit ‘wider and cleaner’ and does stand strong in this big market of diaphragm microphones. As of this particular Magneto microphone, it doesn’t get send back to the distributor. Let them send me an invoice instead!