Moog Music announced the official release of the Theremini; a re-imagining of one of the oldest electronic musical instruments, and Bob Moog’s first love – the Theremin. It is the only known instrument that you play without touching. Moving your hands in the space around its antennas controls pitch and volume. The Theremini combines a powerful sound engine derived from Moog’s award winning synthesizer, Animoog, with the traditional no-touch playing of a Theremin. 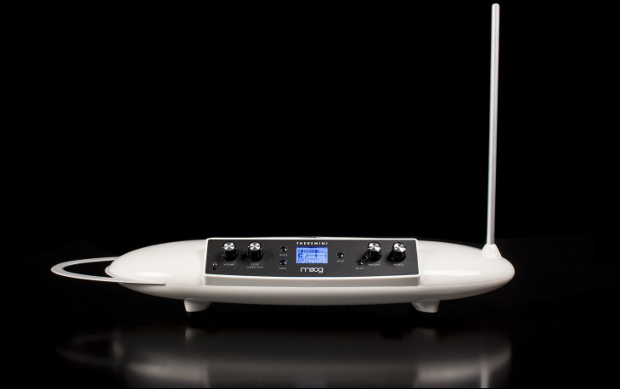 The Theremini’s sound engine captures the vast sonic vocabulary of Moog synthesizers and effects, allowing for a wide range of styles and tones. The front panel features a multi function LCD screen, which displays a chromatic tuner with real-time feedback of each note as it is played. This is a useful tool for correcting a player’s position and pitch for each note. The Theremini also features a portable design with tabletop feet, bottom nesting pitch antenna, and a built-in speaker for quick setup and rehearsal anywhere.

“Learning to play a traditional Theremin is extremely difficult because there’s no tactile feedback, so you have to rely completely on your ears,” said Moog Music CEO Mike Adams. “The theremini has built-in tools that not only help users learn to play, but also teach pitch recognition and scales. Now anyone can play immediately.”

The Theremini features controls for pitch correction, scale, and root note, which allow anyone to adjust the level of playing difficulty, and to explore new means of music creation and gestural control. At the maximum position, the Theremini will play every note in a selected scale perfectly, making it impossible to play a wrong note. If pitch correction is set to minimum, the Theremini performs exactly as a traditional Etherwave Theremin – an analog heterodyning oscillator controls pitch.