M-Audio, an industry-leading manufacturer and distributor of hardware and software
for professional musicians, today announced GrooveLab, a retail-ready bundle of hardware and software that empowers anyone to
create professional-quality music, regardless of their music experience or ability. The introduction of GrooveLab marks a significant
milestone in the company’s push to penetrate the consumer market.

According to a recent Gallup poll(1), 54 percent of American households have at least one person, age five or older, who plays a
musical instrument. Assuming this figure accounts primarily for traditional — or analog — instruments, this statistic represents an
enormous untapped market of musically inclined people who haven’t yet gone digital.

Couple the growing presence of computers in today’s households with the explosion of MP3 and other music-related technologies
such as GarageBand and iTunes, and it is clear that there is a burgeoning market for music products for non-musicians.

“In many ways, we’ve been preparing for our consumer push since the company’s inception in 1988,” said Tim Ryan, founder and
president, M-Audio. “For sixteen years, we carved our niche in the pro market by empowering musicians with superior products at
affordable prices — that same strategy will serve us well in the consumer market.”

For the last decade and a half, M-Audio has pioneered computer-based music creation, focusing primarily on the professional
music market. Now the same technology that has been available to professional musicians is available to all consumers — with
affordability and ease-of-use suited for the mass market.

With the introduction of GrooveLab in 2004, M-Audio will make its most significant push into the consumer market in company
history. To address the consumer market, M-Audio is taking a three-pronged approach, including broadening its distribution reach
to include some of the nation’s most prominent consumer retail chains, catalogs and online retail outlets; refreshing its marketing
strategy to include a new series of advertisements that depict the digital music-making revolution; and several new products that
bring professional quality within reach of the consumer market.

M-Audio’s flagship consumer product, GrooveLab, is significant because it takes all the components necessary for digital music
creation and assembles them in a single, affordable package. Now anyone who has contemplated making their own digital music
can use GrooveLab to build their own computer-based music studio.

Priced just under $100, GrooveLab bundles a USB interface, headset with built-in microphone, remixing software and music loops.
With GrooveLab in-hand, all the customer needs is a computer to start making their own music. Given the product’s affordability
and retail accessibility, M-Audio expects the product will enjoy widespread success with customers who have considered making
their own music but have been intimidated by the cost and complexity of other systems.

GrooveLab is the latest product introduced by M-Audio to augment its consumer product portfolio. M-Audio offers a broad range of
PCI and USB soundcards, speakers, keyboards, microphones and other products that give consumers professional quality at
affordable prices. 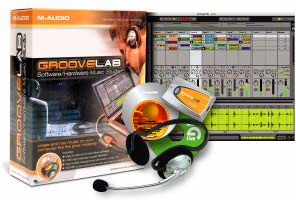