Muse Research announced that its first product, Receptor, is shipping today, and will be available through music retailers worldwide. Receptor is a dedicated music device designed to run VST™ plug-ins in both studio and live applications. Using proprietary Muse software, Receptor can run VST software from the best developers in the world without the complexity and fragility of a computer. In addition Receptor has been optimized for super-low latency, which provides ultra-high performance in real-time environments. Receptor represents a break-through in ease of use, making the task of using plug-ins as easy as “dial and play”.

Receptor is Easy to Use
Just turn Receptor on, dial up a VST plug-in, and start making music. Receptor is completely self-contained and includes a large library of pre-installed VST plug-ins. In addition, Receptor ships with several banks of great sounds using the hundreds of plug-ins, all of which are pre-installed on Receptor and included for free. Audio inputs and MIDI interfaces are built-in, eliminating complexity and increasing reliability.

Receptor runs software synthesis, sample playback, guitar processing, and audio effect plug-ins, all at the same time, essentially functioning as four products in one. In fact, Receptor is like a rack of plug-ins and a rack of effects, all wired to a 32 bit-automated, digital mixer, and crammed into a 2-rack space portable package. In addition, Receptor offers flexible control options that fit easily into any studio or gigging environment. For example, Receptor can be controlled stand-alone via the front panel, stand-alone via a mouse and monitor, or controlled by another computer in the studio via Ethernet. Everything in Receptor is MIDI controllable, with full automation when used with a sequencer or other MIDI Controller.

Receptor is designed for Performing Musicians
From super quiet operation in the studio to a rugged rack mount enclosure, Receptor is a tool optimized for the performing musician. Low latency design allows sounds created in the studio to be used for truly accurate live performances.

“Computers and software have forever changed the way we make music,” said Chris Halaby, CEO of Muse Research. “Receptor harnesses the power of these new technologies, while reducing the complexity, thus making the technology more relevant to the performing musician.” 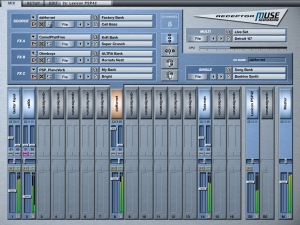