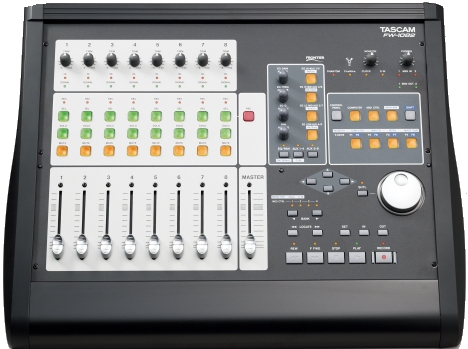 “The FW-1082 offers many of the same powerful audio, MIDI and control surface features of our FW-1884 interface for well under $1,000,” raves Jim Mack, Division Manager for TASCAM. “But it’s not a ‘budget’ interface by any measure. The FW-1082 has 10 inputs at 96kHz, and the included Cubase LE software records 48 tracks at up to 96k/ 24-bit resolution, better than many ‘pro’ applications. Its nine moving faders feel great, and the encoders and transport controls all feel solid and professional. It’s an incredible value for anyone breaking into home recording.”


The FW-1082 is a great choice for small studios, whether someone is just starting out or if they’re upgrading their equipment. Its four microphone inputs, two with analog insert jacks, have phantom power for professional condenser microphones. Four additional line inputs and a S/PDIF stereo input add up to 10 inputs simultaneously, each at 96kHz/24-bit audio resolution.


Two MIDI inputs and outputs are provided for 32 channels of MIDI synth playback or control. The control surface has nine 60mm touch-sensitive moving faders for silky-smooth control over channel level, pan or aux settings. Four encoders are also available for mix control, as well as transport and jog/shuttle controls. Stereo monitoring is included, and the FW-1082 even mixes signals internally for stand-alone use.