IK Multimedia is proud to announce that the T-RackS® VS
plug-in suite is now shipping. The highly acclaimed classic sound of T-RackS® is now
available for the Roland® VS hard-disk recording systems. T-RackS® VS is distributed
throughout the Roland® reseller network. 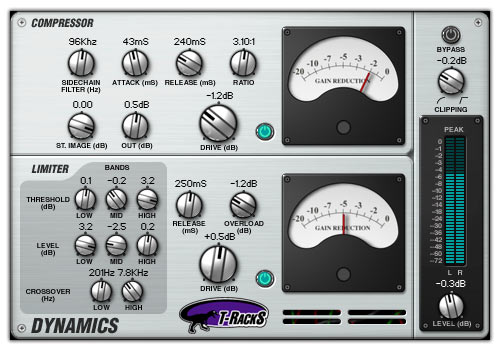 T-RackS® VS runs on the new VS8F-3 Roland® expansion board, which expands the
possibilities of Roland® VS Hard-Disk recording systems by allowing users to load 3rd party
plug-ins (both v1.x and v2.x models).

T-RackS® VS is the premiere analog mastering software suite, offering all the necessary
tools for professional mastering. The processing, including EQs and Dynamics, is based on
physically modeled analog sounds from rare vintage hardware mastering equipment. The TRackS
® VS set of high quality real-time software sound processors offers amazing sound
performance with a similar working environment to that of a high end mastering station,
right inside your Roland® VS Studio.

T-RackS® VS consists of two software Plug-Ins for the VS8F-3 expansion board: DYNAMIC
and EQUALIZER.

The T-RackS® VS DYNAMIC plug-in offers a mastering tube compressor, a multi-band
limiter, and a soft-clipping output stage.

The T-RackS® VS EQUALIZER offers a 6-band stereo analog equalizer with the ability to
process the two stereo channels independently. T-RackS® VS DYNAMIC and EQUALIZER are
able to work with frequencies of 44Khz-48Khz and can be used as a mastering suite or as
independent plug-ins for track compression and EQing.

The T-RackS VS mastering plug-in suite has a MSRP of $/Euro 299 and is available
through the Roland reseller network.