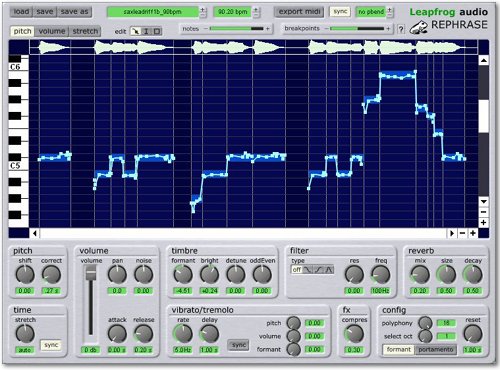 The update is scheduled for release in March, and will be free to all existing Rephrase owners. There will be no price increase to match the leap in quality and performance, so Rephrase 1.2 will represent fantastic value for such professional quality results.


Also the time-limit in the demo versions will be removed from version 1.2 and forwards.


Leapfrog will be updating all of the audio demos on the website and are also looking for high quality royalty-free vocal tracks to better demonstrate the new quality. If you have some own-produced vocals that you would like to contribute, they would be greatfully received.

The update is free to all existing Rephrase owners, and for the moment will remain at it’s existing price of $199 / 159EU / 109GBP. Rephrase 1.2 represents fantastic value for such professional quality results.


A new Windows demo is available from their website: www.leapfrogaudio.com, (which also no longer has a 14-day restriction) together with updated audio demos. Or check out our product page (link below).