CDM-500
Gemini is proud to announce the CDM-500 Professional DJ Station, the all-in-one solution for mobile DJs and club installations. The station features a dual tray-loading CD player with an integrated 2-Channel mixer in one conveniently compact design. Whether mixing at home, in the club, or at a party, the CDM-500 delivers optimum functionality in a unit that is perfect for permanent installations or DJs on the go. 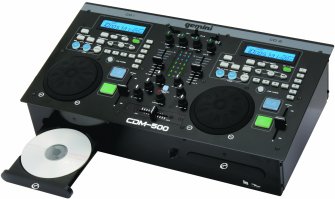 “The CDM-500 is the perfect combination of the all primary elements you need.” stated, Jeff Handis, Gemini’s National Sales Director, “As an all-in-one solution, the CDM’s impressive feature set promises not to disappoint users looking for a complete system”

CS-02
Gemini is proud to announce the CS-02 5-Channel Stereo Club mixer, the company’s new solution for the professional Club DJ. With a wide array of premium features such as a channel-assignable DSP module and numerous audio input options, the CS-02 promises to be a solid contender for high-end mixers in the industry. 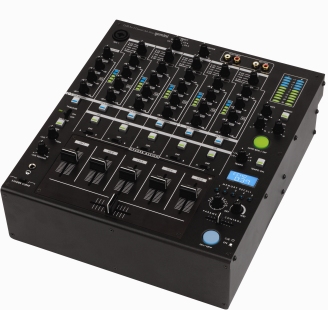 Each of the 5 channels on the CS-02 come equipped with an EFX assign button, crossfader assign switch, and an input assign knob that will allow the user to customize which input is fed to the respective channel. The mixer also features a DSP Effects module that gives the user 25 DSP effects to choose from, each of which can be assigned to any channel. Additionally, the CS-02 features a Zone Select switch that gives the user the power to choose which input is assigned to the Zone Output.

“As a true to form club mixer, we’re excited to release the CS-02 under the Gemini name.” stated Alan Cabasso, President of Gemini Sound Products, “The CS-02 brings club DJs everything they want from a premium mixer. From great effects to loads and loads of input options, the sheer versatility of this mixer is a sight to behold.”

In addition to all these wonderful features, the CS-02 also features 3-band EQ with Gain control for each channel, top-located AUX and REC inputs, and fully featured mic and cue control sections. The CS-02 is set to debut in Q2 of 2006 and will have a suggested retail price of $399.95.

PS-02USB
Announcing the PS-02USB Professional 3-Channel Stereo Mixer, Gemini’s next step into the digital DJ realm. With added connectivity options and fully featured technology, the PS-02USB promises to expand on the ability to create an innovative DJ mix. 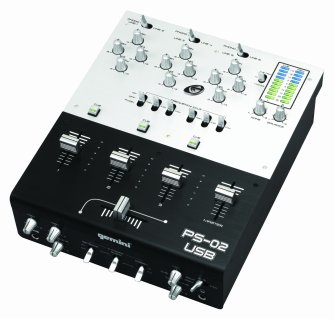 The keys to the PS-02USB’s exceptionality are the two USB ports located on the mixer’s back panel. With the added connectivity, DJs have the ability to mix in music directly from their PC while recording the overall mix directly to their PC. With full-duplex capability, the PS-02USB allows these operations to be performed simultaneously without any third party software or hardware.

“With the debut of our new and improved product line, we wanted to make sure our USB
mixer would go with the flow of the new updates,” said Mark Matthews, Gemini’s
Director of Marketing and Product Development, “We also wanted to create an
innovative product while keeping it within the financial reach of the average DJ – by
adapting the USB feature to the original PS-02 design, we were able to do just that.”

In addition to USB connectivity, the PS-02USB features 6 line, 3 convertible phono/line
RCA inputs, 3-Band EQ Kill Switches with Flash Effect, dual VU display, a fully
featured front panel, and a master output fader. With versatile connectivity options and an
MSRP of $329.95, the PS-02USB stands as the most affordable 3-Channel Stereo USB mixer on the market.

iTrax
Gemini proudly announces the iTrax Mixing Console for the iPod, the newest addition to their premier iSeries product line. With two angled docking stations designed for the iPod® portable music player, the iTrax allows users to set two iPods side by side for a mixing experience like no other. 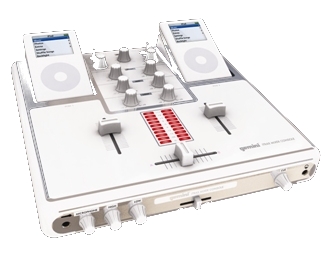 The iTrax comes with two angled docking stations that allow the user easy access to iPod controls when browsing through music libraries. Each iPod channel features 3-band EQ controls with Gain and phono/line input switches for the incorporation of other audio devices such as turntables, CD players, and more.

On the mixing console’s back panel, the iTrax is equipped a composite video output for use with the latest Photo/Video-enabled iPod products, 2 phono/line inputs, and a USB port that will allow the iTrax to function as a dock when connected to a computer, allowing the user to edit the music library of either iPod.

“The ever growing popularity of the iPod has been apparent for quite sometime, so we knew we needed an affordable solution for users who want to mix with these devices,” said Louis Dorio, Gemini’s Product Specialist, “With loads of input options, and video/photo iPod support, the iTrax is the ideal platform for iPod mixing.”

In addition to all these great features, the iTrax also features master volume control, dual VU meter display, a user-replaceable X-Fader, a fully featured cue section, and a microphone control panel with 2-band EQ and volume control. The iTrax is set for release in Q2 of 2006 with a suggested retail price of $179.95.