From Uppsala, Sweden comes a new pure analog synth. Minod systems introduces the Vorga. The Minod Vorga is a new analog synthesizer, designed to offer a unique sound and an easy-to-use interface. For the MINOD synthesizer series, the production limit will be set to ten or twenty units, depending on the price range of the particular design. That is ten or twenty units world-wide! 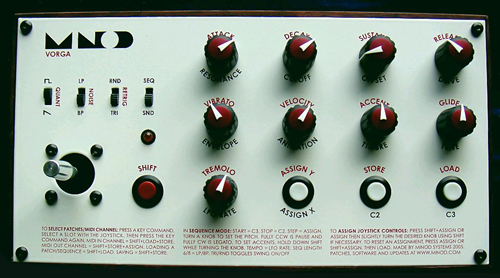 – Interface
The analog joystick by default controls pitch bend and modulation. But any other control can be assigned to it in any combination. For example, you can have filter cutoff frequency on the vertical axis and LFO frequency on the horizontal. The joystick is also used to load and store patches and sequences and to select MIDI channels. The VORGA can store sixteen sound patches and sixteen sequence patterns. It also supports SYSEX messages to upload or download patches and sequences. The VORGA has nine knobs and four switches. All knobs and switches have two different functions in any mode. One direct and one shifted. You will master the interface after a few minutes of practice. The red button is the shift button. All controls sends MIDI messages, so the MINOD® VORGA can be used as a MIDI controller as well.

– DCO
The DCO is directly controlled by the MIDI unit. The timing of the waveforms is controlled by a quartz crystal but the waveform itself is generated by analog circuitry. The waveshaper has two outputs:
* variable width pulse waveform
* saw or hard synch waveform

The timbre knob controls both pulse width and synch slave frequency. The DCO/waveshaper also has the ability to glide, animate and to add vibrato to the sound.

– VCF
The filter is the backbone of its original sound. It has two modes set by a switch: 24dB Low pass (4-pole) or 12dB Band pass (2×2-pole) with variable width, where both ends are 2-pole or 12dB/oct. The cutoff frequency and bandwidth can be varied independently. What makes the filter unique is the two resonance peaks, one on each side of the band pass filter. This creates timbres not available on traditional analog synths. The drive control helps too.

– LFO
The LFO in the VORGA has one control for the Rate, or frequency. It goes from very slow into audio (well above 100Hz). It has a triangular or random waveform. It can be synched to MIDI.

– ENV
The envelope generator on the VORGA is the standard ADSR (attack time, decay time, sustain level and release time) found on most analog synthesizers. It controls the VCA output driving the filter, can influence the waveform via the animation control, and influences the filter cutoff frequency of the filer via the envelope knob. The VCA level is also influenced by MIDI velocity, as controlled by the accent control.

– SEQ
The built in sequencer works like an analog sequencer. You set the notes by turning the knobs. Velocity can be edited for each note. Notes can be turned off or joined to the previous one. The note length can be set from very short to overlapping, to allow glide effctes. The sequence length can be set to 6 or 8, in 16ths or 8ths, straight or swing. The sequence can be transposed by an external MIDI keyboard, the internal keys or using the joystick.

The joystick keeps its setting when going into sequence mode, so assigned sound patch controls can be accessed during sequence mode.

– MIDI
The Vorga supports a full MIDI interface. It can function as a master sequencer, be used as a general controller or playback an external sequence track. All parameters can be controlled at any time via MIDI.

Using SYSEX commands, patches and sequences can be uploaded to a computer and stored for later use. The firmware can also be upgraded via MIDI as bug fixes and new features comes along.

– Construction
The Vorga is made of a wooden box and an aluminum panel with large soft-touch knobs. There are several options; oak, elm, birch, or jarrah, with matte or glossy finish. Its dimensions are approximately 26x14x8 cm (w/d/h).

The price is 5800 SEK, or €640 plus shipping, DC adaptor not included. More information is available at the Minod website.