TC Electronic, the company behind legendary DSP products such as the System 6000 and the Finalizer, is now bringing its legendary DSP to the world of audio interfaces with todays announcement of Konnekt. Konnekt 24D is a 14 in 14 out audio interface that integrates TCs world renowned effects in a state-of-the art design that allows for front panel control of internal mixer parameters. 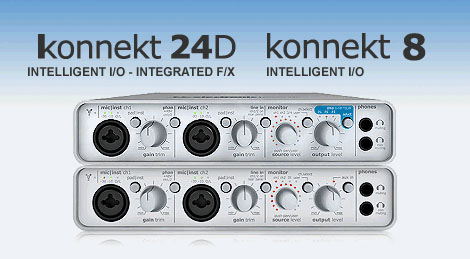 TC’s new audio interface was designed for recording and performing musicians seeking the highest possible sound quality from input through built-in real-time DSP effects to the recording application. In addition to the built-in DSP effects, Konnekt 24D features two front-panel inputs that combine TC’s new IMPACT™ (Integrated Mic Preamp Circuit Technology) mic preamps with true Hi-Z input circuits optimized for guitar. The non-DSP effects version, Konnekt 8, shares the same basic architecture and feature set with less I/O. Both Konnekt 8 and Konnekt 24D are optimized for use with active monitors, and come with Cubase LE software so users can start recording right out of the box. Units will ship in the summer of 2006 at EUR 470 retail ex. VAT for Konnekt 24D and EUR 320 retail ex. VAT for Konnekt 8.

DSP effects built-in – The Fabrik C channel strip and Fabrik R reverb known from TC’s PowerCore platform (each EUR 299 retail ex. VAT) are built into the Konnekt 24D. Both Fabrik effects feature TC’s proprietary MINT™ technology which allows the user to execute complex audio adjustments simply by moving the MINT icons around the screen. Konnekt 24D’s onboard effects are designed to work even when the unit is used in stand-alone mode, a feature that allows users to easily play and monitor without needing to power up the computer.

Innovative features – Konnekt has a number of innovative features that transcend the conventional way of thinking about audio interfaces. TC NEAR™ (Network Expandable Audio Recording) makes it possible to stack up to four Konnekts together to obtain a massive amount of I/O and DSP effects channels. Not only can multiple devices be connected to the computer, but two musicians each with a networked Konnekt can direct monitor each other in real time. The intuitive control panel gives instant access to all features and provides automatic input detection. Even when using the unit in stand-alone mode, the front panel light ring provides easy access, instant control, and visual feedback of important mixer parameters. Users working with active monitors will appreciate the analog volume control that ensures an extremely low noise floor. Other monitoring options include two headphone outputs, one with a speaker muting function that mutes the speaker automatically when the headphone jack is plugged in. For easy set-up and mobility, Konnekt can be bus-powered via the FireWire cable from a computer.

I/O configuration 14/14 – The front panel of Konnekt 24D sports 2 mic/instrument inputs featuring IMPACT™ mic preamps and dedicated guitar-optimized circuits. The rear panel offers 4 additional line inputs, 2 of which are coupled with the front inputs, as well as 4 analog outputs, 2 of which are controlled by the analog volume control for perfect integration with active monitors. Konnekt 24D also has 8 channels of ADAT and 96 kHz S/PDIF. Konnekt 8 features the same high quality mic/guitar inputs coupled with a stereo set of line inputs on the rear panel, along with 2 analog controlled line outputs. On top of this, Konnekt 8 has an additional auxiliary input for convenient monitoring, and 96 kHz S/PDIF. Both Konnekt 24D and Konnekt 8 provide full sample accurate MIDI implementation and FireWire connectivity.

Intuitive design and TC quality effects – TC’s new Konnekt audio interfaces are a dream come true for recording and performing musicians, who wish to capture their music in the highest audio quality. The intuitive design allows the users to focus on their music, and with the Fabrik C channel strip and Fabrik R reverb, Konnekt 24D has the most essential music production tools covered – in renowned TC quality.