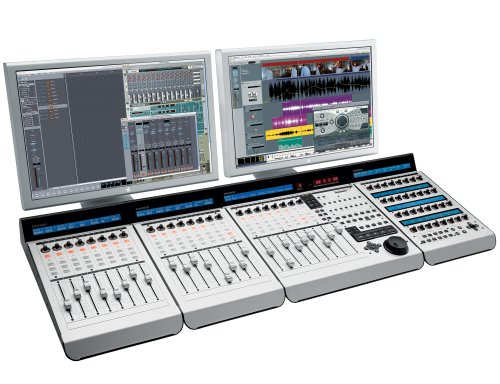 “Mackie Control Pro controllers allow users to get the most out of Logic, Pro Tools and other major audio production software by giving them control they simply can’t get from a mouse or generic controller. Our new series once again sets the standard for precision, expandability and ease of use,” said James Woodburn, Mackie Recording Brand Manager.

Sporting a new streamlined appearance, the Mackie Control Universal Pro control surface boasts the ability to connect directly to a Mac or PC via USB, and support for connections of up to three additional pieces of external MIDI gear. Like the Mackie Control Universal, the MCU Pro features nine motorized, touch-sensitive Penny + Giles faders, eight V-Pots and more than 50 master buttons, as well as a sophisticated communication protocol that enables ultra-precise control, makes setup easy and gives real-time visual feedback via the huge backlit LCD and eight LED rings.

The Mackie Control C4 Pro plug-in and virtual instrument controller offers hands-on control of up to 32 simultaneous parameters as well as extensive visual feedback via four backlit LCD “scribble strips.” Like the Extender Pro, the C4 Pro has been designed to seamlessly connect to the MCU Pro, but can also operate in standalone mode. The unique communication protocol employed by the C4 Pro allows for plug and play setup, and enables users to view parameter names and values in real time. When the C4 Pro is combined with Mackie’s free C4 Commander Pro software, users can also take control of MIDI hardware such as synthesizers, effects and amp modeling processors, all without leaving the mixing sweet spot.