The 2488mkII is the follow up to the best selling, simple to use 24 track recording and mixing workstation for home studios. 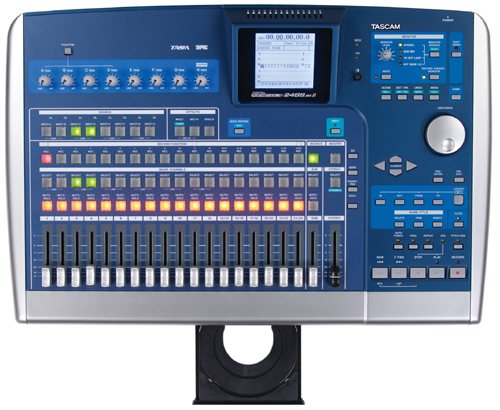 Like its predecessor, eight inputs can be simultaneously recorded into the XLR and 1/4″ inputs – enough for a whole band. 19 physical faders control mono and stereo channels without scrolling through pages for quick and easy mixing. Each channel has 3-band EQ with a parametric mid-band and access to three built-in effects processors, including reverb and multieffects.

Rick McClendon, Vice President Sales, Tascam Division told us, “The 2488 has been a top-seller in its price class. Even today, the 2488mkII remains the only recorder with the power to record 24 tracks at 24-bit resolution to capture every nuance. The new guitar effects sound fantastic, and like all Tascam Portastudios it’s simple to use. It’s sure to be another winner from the company that invented home recording.”

The 2488mkII adds an 80GB hard drive, double the size of the previous version. Improved guitar overdrive effects have been added, and the “Slow-Speed Audition” feature from TASCAM’s line of CD Trainers is included for learning new music. Tascam say that a large, bright display makes the unit even easier to use, and new CD mastering features include defining tracks in a live recording and a faster CD burner.