Moog has released version 3.0 of the Voyager Editor Librarian, which has a exciting new user interface. 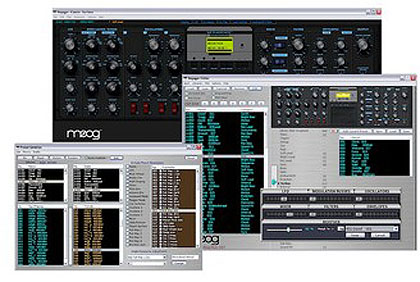 The Minimoog Voyager Editor-Librarian (New Version 3.0!!!) is a program designed to be the ultimate tool for organizing and creating presets for the Minimoog Voyager. Through a MIDI connection, this program can pull single presets or the entire bank of presets from the Voyager – as well as replace individual presets or the entire bank. Once the presets are in the computer – all parameters are displayed on the graphical user interface, including EDIT mode functions like Pot Mapping, Touch Surface Destinations and Filter Poles. The settings of the front panel controls are displayed with high resolution editing available, so this program can also be used to learn how the factory presets work as well as edit sounds with precision. Presets can be added to a library in user-named categories for creating custom preset banks – great for the gigging musician! In addition – the “Genetics” function can be used to create new presets by morphing or mutating two presets together into a whole new bank.

A Voyager OS update function is included. It simplifies the updating of Voyager firmware. A Voyager must be updated to at least OS 2.5 or later to work with this software. However, for those who do not have the hardware upgrade for V 3.X, you will not be able to access more than a single bank of presets. This hardware upgrade extends the Voyager’s preset memory to 7 banks of 128 presets for a total of 896 presets.