The iPad has been available for a while now and as promised we are gonna try to give you an insight on the use of the iPad in the studio and on stage. As the release of the iPad in the US was much earlier (then Europe) I have gotten a good overview of apps that are available and what is about to be released. This review or maybe better said, this iPad story mainly focuses on the use of the iPad with music/audio apps in an studio/stage environment. The apps that will be discussed are just a selection of the large amount of apps available at the moment. And allthough the iPad is only just released there is already so much to discuss that there will be several parts to this story. 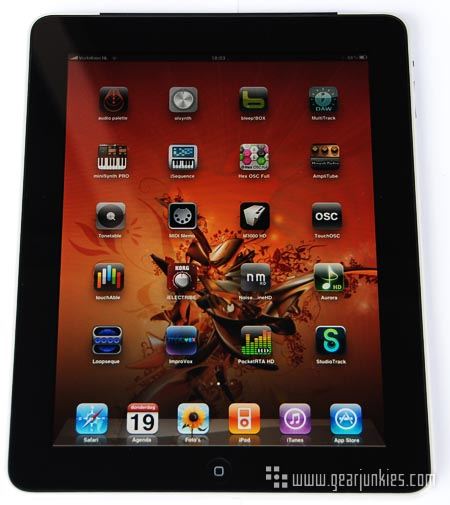 We can divide (audio) apps in several categories. First off we have instruments like synths, piano’s, guitars and drums. Then there are the effects, dj tools, midi controllers and resource apps like audio analyzers, apps for sheetmusic and tuners (for guitars). These are just examples as I will give my attention to apps for music creation and stage. Next to apps I will discuss some of the hardware available for the iPad like MIDI and Audio interfaces in one of the next parts of our iPad story/review.

Many of the apps are freely available. But as nice as some of them are, most of them aren’t really exciting. Often these free versions are demos of the paid/pro versions. Virtuos Piano Free HD, Beatwave, Music studio Lite, Sylo Synthesizer, DigiDrummer HD lite en Amplitube Free for example are very popular in the iTunes charts. However most of these free apps are lite versions and are ‘ok’ to try out, but I still got the feeling I was missing something.

Categories
Looking closer to all instrument apps I can divide them in two categories. First off there are these apps which generate noise and sounds but definitely don’t look as an instrument, as we know them. These apps are fun and even interesting to play with but to use them in a production seems to be very unclear. It is more like gaming with sound.

As this is the first part of our iPad and apps story, I am gonna focus on the instrument emulation apps. These instrument apps clearly are what they seem to be. Synths, guitars, bass guitar, drums, harps and so on. Next to these instrument apps there are also grooveboxes, sequencers and even complete DAWs available.

Some Examples
First off an app that surely made a buzz when it was released, the Korg iElectribe. This cool app is a remake of the Electribe R series. An app I have to mention here but that’s where the info ends as Korg didn’t cooperate in any way for this review. Sorry!

One of the highlights during my app test was surely the M3000 HD. This is a fantastic remake of the well-known Mellotron. All the sounds and presets of the original can be used. The strings, choirs and church organ, they are all there. You can combine the sounds, set the volume and pitch plus a reverb is available. I did miss a sequencer, but that said it was big fun playing with the M3000 HD!

A nice synth that can be used as a monophonic, or polyphonic synth (the switch is on the OSC screen), is the miniSynth PRO. You can use with a single or double keyboard and has its own sequencer and even arpeggiator. Another feature is extended filter section with a VCF, VCF envelope and a AMP envelop. You can also set noise. The two Oscillators have each six waveforms of which OSC1 is the master. The OSC is usable in a FM mode where the amount of FM can be set. But it wasn’t clear to me what the results were. It is a nice synth to play with allthough the sound was a bit thin to my liking.

Virsyn iVoxel is a vocoder app. With iVoxel you can split several pre-programmed words like OE’s and AAAH’s over the virtual keyboard. You can split all the voices over every key. Of each voice you can set the Glide, Vibrato rate and depth and delay, waveform and pitch. You can play and record all individual voices with built-in audio recorder and record your own vocals. You can also create sequences and play and record them. If wanted in a loop. With the mixer you can mix all the voices and give them delay and or chorus. iVoxel lets you save your creation and by wifi connection (and a internet browser) load it up to your computer and use it in your production. Very useful indeed!

And finally we have the olsynth. Another monophonic synth with two oscillators. This is an app without menus after menus. Visually much simpler to navigate. For each OSC you have four waveforms. With your finger you can slide the second menu upwards where you can change the settings of the oscillator. In another screen you can change the settings of the LFO wave. Your choices here: filter, pitch or waveform. Then there is the ADSR screen, no explanation necessary I think. Then we have the filter cutoff and resonance. Next screen the filter ADSR and finally we have the arpeggiator which you can set up to five octaves and four modes (up, down, up/down and random). Scrolling through the screens is easy and fast, all buttons are large and clear. One thing that bothered me was the fact you can’t store any preset. Like the miniSynth Pro the sound is a little bit on the thin side. Another nice synth to play with but I can’t say a real addition to your synth collection.

Thoughts
So far the first part of our review (or test as you will) of the iPad and a selection of music apps available at the moment. General conclusion is that allthough many of the apps available are well made, look very good and can be operated easily, the sound of most apps could be better. Generally I found the sound of many of them on the thin side.

Something I genuinely missed with most all apps was a sequencer and a function to export or save your sounds. iVoxel should be an example for other developers of music apps. This app made it very easy to create and export your work, so you can use it in your productions. A feature that is missed with all apps is a MIDI I/O function. And this is not unfeasible just look at the MIDI Mobilizer by Line 6. Developers, … it can be done!

So what about the iPad then? Don’t get me wrong. Working with the iPad is great and also a lot of fun. And as I mentioned before many apps are really fun to play with. However if we look at the functionality for making music I am not so sure. Looking at just the instrument apps I miss too many features and functions to consider these apps as an addition to a setup.

In one of the next parts I will be looking at several midi controller apps. Here is where I see more possibilities for usage in a studio environment and also stage performances. But first I am gonna discuss a few more … well Gearjunk’esque types of music apps like Loopseque and MorphWiz in the next part of our iPad story.