Fabfilter PRO-C is a compressor/limiter plugin. But what does a compressor really do? To understand this we have to go back in time when professional studio’s didn’t use any compressors. The recording engineers had to manually control the faders in order to compensate for any changes in level. This was even before mix automation. John B. Howell was the first one to come up with the idea to develop a device which could control the level of audio signals. The first (experimental) version didn’t have any variable settings and acted more like a limiter. Still recording engineers wanted it because saved them a lot of effort. Since then the compressor has been evolving till current day even in the digital realm.

Ways to control your typical compressor are:
– Threshold
This is the relative range of dB where a compressor becomes active. E.g. when the threshold is -24dB the compressor will compress everything louder than -24dB.

– Ratio
Ratio is the amount of compression that takes place compared to the original sound. E.g. 4:1 ratio means that the signals 4dB above threshold will be compressed to 1dB and effectively has been compressed by 3dB!

– Attack, hold and release
These values control the different compressing speeds of the compressor. Attack is used for the speed a compressor starts to compress. Hold is used to control how long the compression takes place. Release is the amount of time the compression will decrease back to neutral.

– Make-up gain
This function allows for controlling the signal level to get boosted because typically the compressor lowers the original signal.

Back to the PRO-C
At first hand this plugin has more functions as mentioned before and they will come in handy. Depending on the application you use it for those functions will allow you to fine-tune various aspects of compression which will be explained next.

The Pro-C is divided in a few parts. Left on top there is the input/compress part. Mid up is the attack/release part and to the right is the output part. Underneath is the midi/control part and beneath that is the analyzer part. 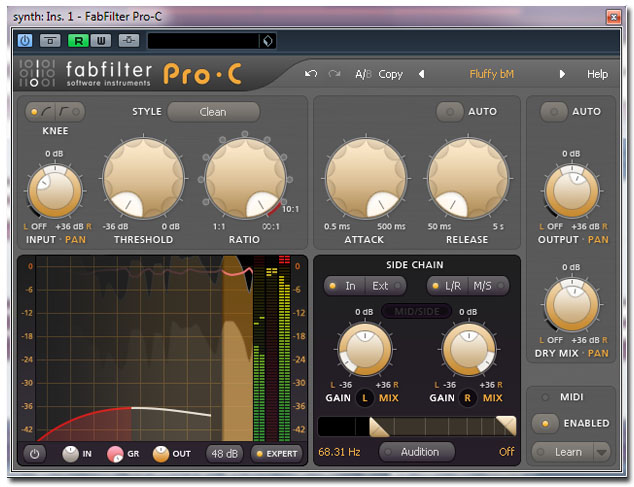 INPUT
The input part shows the input (gain), threshold and ratio. The ratio can be turned up to 100:1 which effectively turns it into a limiter.

OUTPUT
The output has the make-up control which also can be set on AUTO. This will automatically adjust the make-up gain depending on the threshold and ratio settings of the compressor. There is also a dry mix control which allows the original and compressed signal to be mixed together resulting in what is called parallel compression.

ANALYZERS
The most elaborate part of this plugin is the analyzer. This shows you exactly what the compressor is doing. To the left there is the graphic of the input/output relation. Horizontally shows the input level, vertically shows the output level. Next to that is a time based level meter that shows the level for the last second together with the compression gain reduction.

Bottom right shows the Expert control which enables the side chain controls. With these controls you can adjust the frequencies the compressor uses for gain reduction or even to use another audio signal to control the gain reduction.

USING THE COMPRESSOR
Especially the graphics that show what the compressor is doing is very helpful for the users that don’t have that much experience using compressors. It also helps a lot when you use the side chain option of the compressor.

The sound of this compressor is rather versatile and allows the user to apply this plugin on various jobs from compressing vocals transparently or giving percussion more body and character. It even can be used as a pumping bus compressor with or without the side chain.

Compared to analogue compressors you still hear a digital edge in its sound but compared to the vast collection of software compressors it still sounds relative neutral. As a coloring compressor it has its limits but its versatility makes up for it. You’ll need many hours to find out what this baby can do.