The dream to combine the power of a PC and the ergonomic of a real musical instrument is becoming reality. Feeltune announces the release of the Rhizome; one of the highlight of the MusikMesse when it was first presented last March. Many sites and magazines rated it best of the 2010 trade show! The Rhizome is the future of groove machines.

What are the differences with the competition? The Rhizome is a hybrid in which you install virtual instruments and effects in a VST/VSTi format (For Pc). No more limitation in terms of sounds and effects; with the Rhizome you choose the style of sound and instruments you want to play. Once downloaded you can mix your plug-in with the mixing desk; create your sequences, patterns and tracks with the multi modes and multi tracks sequencer which is the brain working behind the scene. 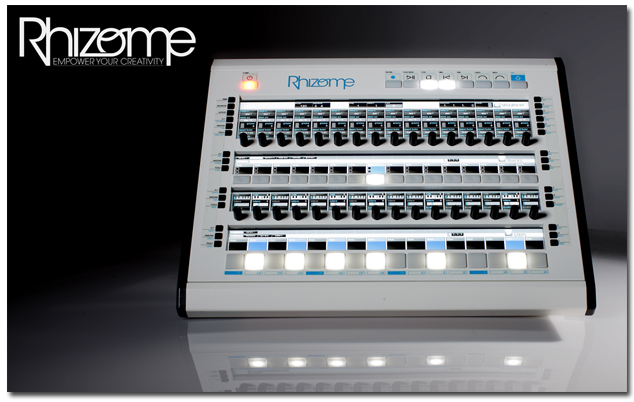 What are the differences with the other hybrids already on the market? The Rhizome is not just a keyboard with a Pc or a Pc Rack; it is a real musical instrument which has been designed for the pleasure to play and compose music and is equipped with software running an innovative interface with numerous displays and controller.

The Rhizome is a real time instrument: programming, recording, sampling, adding instruments and effects, tuning; all you do is live! There is no interruption when you play on stage or record in a studio. The objective: to free up your inspiration and creativity.

The development of the Rhizome took several years of R&D; 50 engineers and the validation of around 10 user groups. Today the Rhizome is an aggregate of the best technology and know-how.

– For the Audio it is RME that does the job; it has been chosen because of its stability and sound quality which is recognized by everybody.

– For the controllers; the Rhizome has 102 controllers in which you find 16 dynamic pads and 32 endless knobs.

– You get the Windows XPE which is a version of Windows XP Pro that has been redesigned and compiled especially for Feeltune. It offers a better stability and a total compatibility with VSTs.

– For the effects and instruments; some of them have been developed by Ohm Force well know key player of the market.

– A Design and solid ergonomic; a size and weight that allows bringing the Rhizome with you as a hand luggage when you travel by plane. For its embedded system; you get power and reliability: Intel processor and mother board, server AC, silent fans.

– Connections: The several in/out allow you to connect and use screens, mousse, midi controllers; hard disk and/or additional audio card.

– Communication: The Rhizome is the first instrument to totally implement CopperLan; a new protocol that above the Midi transcription really revolutionize the communication between audio-video machines.

The Rhizome will be available in three configurations (SE, XE and UXE) each with different specifications. Check the Feeltune website for details.