Playing with ‘gear’ is the average Gearjunkies ‘wet dream‘ (so to speak). As it happened we were able to get four top DJ Midi Controllers in the same room at the same time. As two of the Gearjunkies founders (Marc and Mark) have a strong DJ heritage we’d decided to throw a party to have some good ol’ DJ Fun! Plus at the same time, do a good comparison between the controllers that were available. 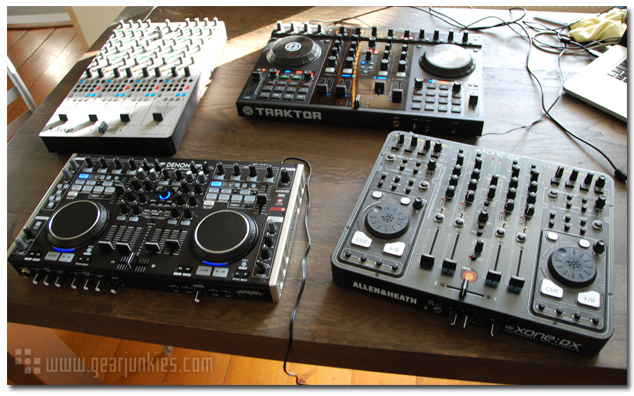 Another fact that’s important to know is that this ‘comparison’ is based on our own starting point of which is ‘the Gearjunkiest of them all?‘. Which means, what controller we liked the most in terms of ‘fun’, ‘coolness’, ‘looks’ and usability?

In Short
– 4MidiLoop has good dimensions. It doesn’t really look like a controller but more like a 4 channel DJ mixer. Its layout is very clear and all the buttons and faders are well placed. This controller has ‘depth’. Everything you need within Traktor software can be controlled with this controller. (Priced at 1399 Euro) 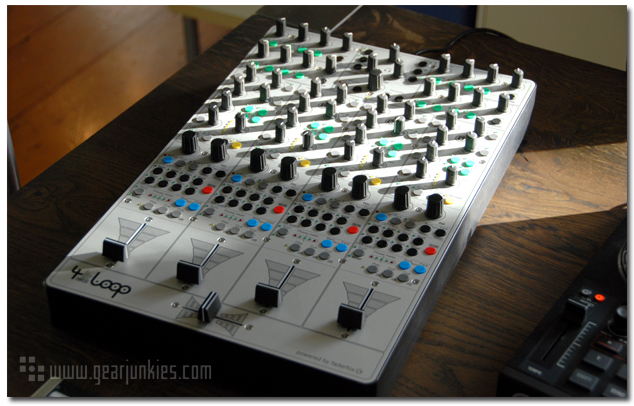 – The Xone:DX is a solid controller. You’ll notice that A&H’s experience with live and DJ mixers emerges. It has big subtle and smooth faders, two jogwheels and it’s the only controller with a closed system with Serato Itch software. The DX has a high quality audio interface built-in with lots of audio IN and OUTputs. The filters of the DX are very good. (Priced at 1299 Euro) 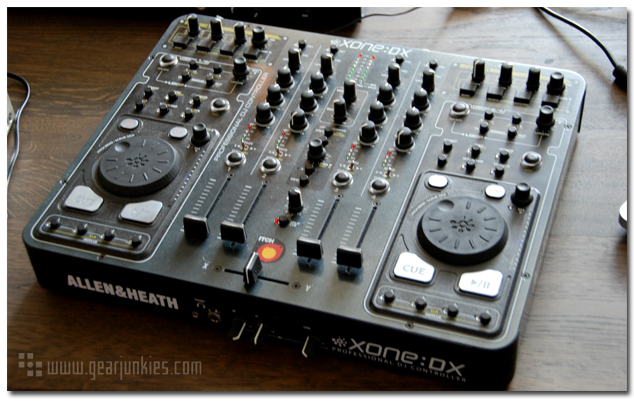 – The Native Instruments S4 Kontrol is the biggest control of the pack. It has a clear and well organized layout. All functions have a logical layout, the buttons are big and solid. All push and rotary buttons have enough room to operate. The S4 comes with special S4 Traktor DJ Software, with sample decks. This gives a complete new meaning to DJ’ing with software. (Priced at 999 Euro) 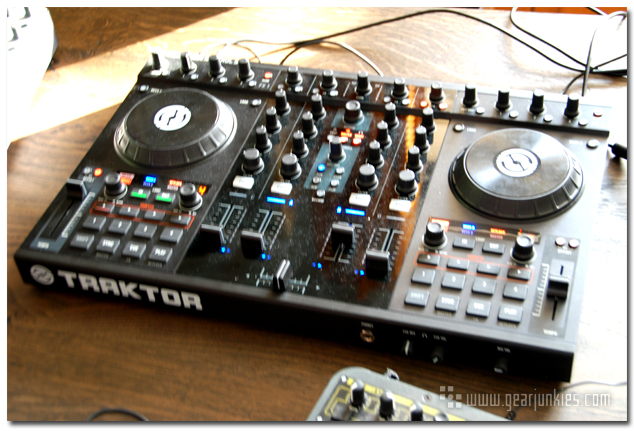 – Finally the Denon DN-MC6000, hot from the press. We even picked it up at the importers ourselves for this comparison. The first you’ll notice is that this puppy is heavy! Nothing plastic here, all just solid steel/metal. The controller has lots of well lid buttons. All buttons are logically placed with a well thought thru layout. You can use it with Traktor Pro and Virtual DJ 7. The Xone:DX is also usable as a stand-alone DJ mixer. Again the buttons and faders feel very solid and sturdy. (Priced at 825 Euro) 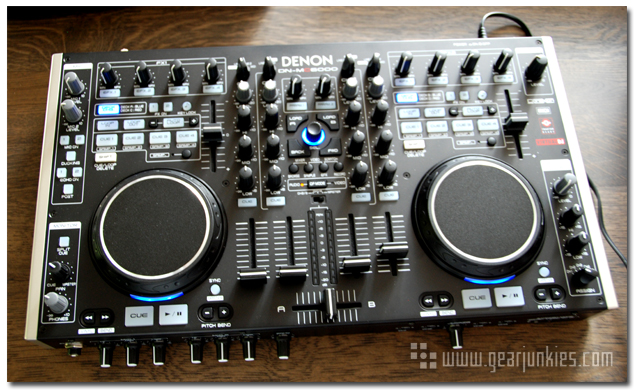 This all sounds pretty good, but are there any downsides with these controllers? Well, yes there are a few. You really miss a audio interface with the 4MidiLoop. Also the .tsi file for Traktor, that came with the controller, didn’t work perfect. Several buttons just weren’t mapped and for a controller of this price you expect a flawless functioning and installation. Not having to figure out which buttons to map where. Mark (with a K) did miss a jogwheel control on this controller.

The mapping with the DN-MC6000 didn’t work perfect as well. On the accompanying CD there wasn’t a .tsi file for Traktor Pro. The LE version (that comes with the controller) worked well. Because of the double action as a controller and as a mixer, we had some initial problems to get it to work properly with Traktor. The manual does help out when it comes to the settings of the mixer, but not with Traktor. So a decent knowledge of Traktor is needed.

Because of its size, 19 inch, the controls and buttons are a bit close to eachother. In the mixer section the EQ and Gain rotary buttons don’t line up with the faders and the control of the effects and such are placed above the jogwheels. Because the jogwheels are very sensitive, if you touch them by accident the music stops. Something you really don’t want during a set!

The Allen&Heath Xone:DX is the only Serato Itch controller. Serato Itch has four decks, but less effect slots and not all effects, besides the EQ and filters, are of good quality. But then again these are software issues, not of this controller! Furthermore the big knobs on the front make it a bit vulnarable if you’r planning to transport it a lot.

With the S4 Kontrol we couldn’t find a lot wrong to be honest. However we did miss a seperate booth output and balanced XLR outputs, which the Denon DN-MC6000 and the A&H Xone:DX did have! As Traktor can be considered as the new industry ‘standard’ that was a bit disappointing.

Something we noticed with all four controllers was the fact that they all had this great FUN factor. The 4MidiLoop is an awesome controller for the true Traktor addict. For us both (Marc and Mark) this controller had the best looks, especially for the Gearjunkie that we are. On all four controllers the layout was pretty much straight forward and most controls (not all however) were logically placed. There was nothing overdone, no tangled up controls and buttons with double functions. All buttons were lid, except the 4MidiLoop buttons. Very nice was the feature on the S4, DN-MC6000 and Xone:DX that every button had its own color setting for each deck. So from the color you know which deck you are controlling. Once the installation is succesfull you are up and running. 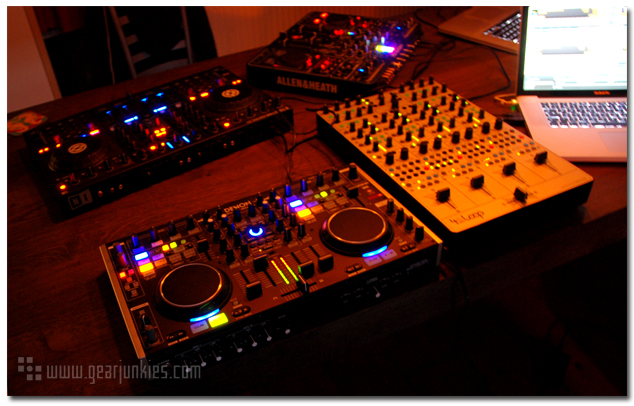 If you are looking for a compact, solid controller with a built-in mixer the Denon is the best choice. The DN-MC6000 also has the lowest price.

The S4 Kontrol makes up for everything we should expect from Native Instruments. A great solid controller with a very user friendly layout. As it is the biggest of them all, there’s enough room and nothing gets tangled up. With eight sample decks this controller gives new meaning to software DJ’ing.

Do you want to work with other software then Traktor then the Xone:DX comes into the picture. Also because the A&H controller has a superb sound quality and built quality. It’s definitely not the cheapest but you surely get what you pay for!

Verdict
So what’s the verdict? Which controller of the four would we choose if we were forced to make that choice? After a long deliberation we decided to go with the Native Instruments S4 Kontrol. Again nothing bad about the other three but we had to make a choice.

The S4 has just everything there where a DJ wants it. Everything is packaged in a beatifull looking, very well built, solid exterior. Together with the special S4 Traktor software it’s the ultimate DJ controller combination. It all works without any hassle with a perfect sound quality.

Future
We do think that DJ controllers will become the future of DJ’ing. As we saw at the recent NAMM, every brand/manufacturer has a DJ (MIDI) controller released or announced. And that should be seen as a sign. It gives DJ’ing a new dimension and to be honest we found it much more exciting and fun to DJ with more then just some CDs.

The task of choosing the right controller (for you) won’t be easy. Will this comparison be of any help in that choice? It might, it might not. Who knows? One very clear conclusion is that price won’t be the final factor in that choice. The cheapest or the most expensive doesn’t mean the worst or the best!

The Dutch version of this review is available at our dutch DJ blog www.dj2dj.nl