Grammy Award-winning mix engineer Dave “Hard Drive” Pensado has a mind-numbing list of amazing record credits to his name, including mixes he’s done for Beyonce, Christina Aguilera, Kelly Clarkson, Mariah Carey, Elton John, Michael Jackson and many others. But the thing that probably endears him most to fans these days is this year’s launch of his weekly Web show, Pensado’s Place, in which he and co-host Herb Trawick discuss a wide variety of music and recording topics with high-profile guest engineers, producers, record executives and artists. 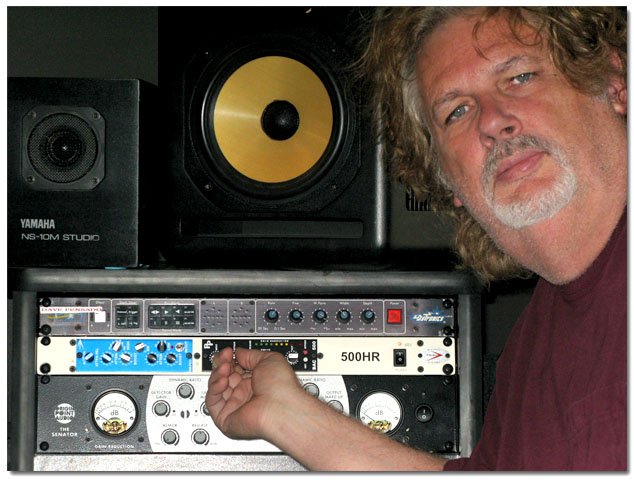 Two of the things that Pensado has been talking a lot about lately–both on and off his show–is his affinity for his A-Designs Audio EM-PEQ Pultec-style equalizer and Pete’s Place BAC-500 compressor, which are mounted together in an A-Designs Audio 500HR rack. According to the astute engineer, the two 500 Series modules have become an essential component of his mixes in Studio 3 of L.A.’s Larrabee Sound Studios, where Pensado is in permanent residency and mixes between 200 and 250 songs a year.

“I originally thought the EM-PEQ might be a straight substitute for a Pultec EQP-1A, but it’s a little bit different, and I mean that in an extremely good way,” says Pensado. “Of course, the Pultec is one of the greatest pieces of gear ever built, but it tends to make you sound like everybody else because everyone and their mother uses one in some form or another. Plus, with the tubes and capacitors all aging on the vintage units, I might have to go through ten of them to find one that I actually like the high end on.”

“Thankfully, the EM-PEQ is very predictable in what it delivers, which is a sound that works just as well as the Pultec but, at the same time, can be rather unique. With the proliferation of dance music and the emphasis on bass frequencies, I find that I actually get a littler clearer low end–yet still equally fat–out of the EM-PEQ, which I really like. And the module’s top end sounds very, very nice as well, particularly on background vocals. I recently used it on mixes for Brandy and Keyshia Cole and it was really cool. Again, don’t expect it to sound exactly like a Pultec, but hope for something better and you won’t be disappointed. It’s just a great tool.”

In addition to the EM-PEQ, Pensado has been frequently relying on a BAC-500 compressor from A-Designs’ sibling company, Pete’s Place Audio. According to the engineer, he used the two 500 Series modules together on the remix of Michael Jackson’s “Hollywood Tonight” and new albums for Jill Scott, Boney James, Gloria Trevi and JoJo. “I love the BAC-500,” he says. “It’s a real workhorse and top-notch piece of gear as well. I use it on all sorts of things, like keyboards that are a little unruly, synth bass, percussion, kick, snare and vocals.”

“In general, Peter Montessi’s products all have a reputation for being consistently very musical and usable, yet reasonably priced so that anyone can afford them. Many times I find myself reaching for his gear first, and when I don’t, I often wish that I would have!“

Pete’s Place Audio was founded to bring a wide variety of handcrafted, innovative, boutique recording and live audio products to market. Under the leadership of President Tony Shepperd and backed by the manufacturing expertise of A-Designs Audio, Pete’s Place collaborates with some of today’s most talented recording artists and engineers to help determine what products, regardless of how esoteric, they feel are missing in the studio and live performance environments. For more details, visit www.petesplaceaudio.com.